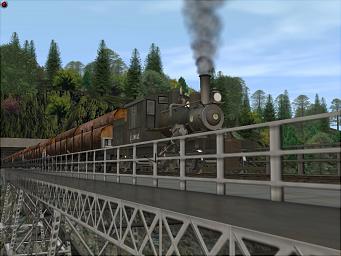 All Images (5) »
Following Trainz Railway Simulator 2004's UK debut at ECTS, Just Trains (part of the Just Flight group) and Auran have confirmed details of its launch on British shores.

Developed by the award-winning team at Auran - creators of the hugely successful Trainz - this is the ultimate standalone railway simulator that provides a complete experience for every train fan. Railway enthusiasts are often fiercely loyal to their native rolling stock and in Railway Simulator 2004 the trains included span the continents as well as the ages.

Where it all began...
Trains and railways have fascinated people since their inception 200 years ago. In 1804, Richard Trevithick tested his newly invented steam locomotive which drew five wagons and a coach with 70 passengers. In 1825, the "father" of railways, George Stephenson, built the famous Locomotion locomotive and the first railway between Stockton and Darlington was completed - the rapid evolution of steam engines had begun in earnest!

Without doubt the invention of the steam locomotive was the most profoundly influential technical development of the 19th century. Railways allowed the transport of goods and passengers at previously undreamt of speeds and changed the entire dynamics of society.

Trainz Railway Simulator 2004 builds on this great heritage to put you in control of building, controlling and managing a variety of railways around the world, from the golden era of steam, through the change to diesels right up to modern day electrics. Are you ready for the challenge?

As Engineer, immerse yourself in a totally interactive, realistic world. Choose from high-speed passenger runs, shunting cars in a busy industrial yard, or carefully navigating a 200 ton logging train down a steep mountain range.

As Yardmaster, manage your drivers as they carry out their daily tasks. Ensure your trains are in the right place at the right time to keep pace with supply and demand of the interactive industries.

As Route Builder, create your own stunning routes and worlds.


The Deal
The deal will ensure that fans will receive 100% commitment to customer care from every member of Just Trains staff and localised editions in a wide variety of retail stores.

"We're very excited to have the opportunity of working with Just Trains to bring the latest version of Trainz to one of the key markets in the world," said Tony Hilliam, Auran's Marketing Director. "This is tremendous news for fans who are now assured of great service and support and much broader availability than in the past."

"In what will be a pivotal year for the train simulators, we see this partnership with Auran and Trainz as cementing our position as the number one publisher in this genre," said Mungo Amyatt-Leir, Managing Director of Just Trains. "We've been watching Trainz evolve and improve over each successive version and we're sure that the increased level of realism and interactivity in this latest release will be just what many fans have been looking for."