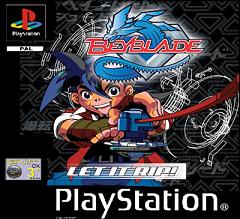 Atari and Nelvana Limited's Beyblade, the video game of fast spinning high performance battling tops based on the best-selling toy and hit television series, has proved an instant hit by entering the UK All Formats Game Charts at number 2, a massive achievement for a game only available on the PSOne console. The game was made available on the 22nd August.

"We are thrilled by the early sales figures and chart position of Beyblade," said Jeremy Wigmore, Managing Director of Atari UK. "The sales and chart success reinforces what a phenomenon Beyblade is, and we are proud and delighted that Atari is responsible for bringing Beyblade to a gaming audience for the very first time."

In the game, competitors battle in an extraordinary arena with their Beyblades, using their exceptional powers to destroy opposing blades and make themselves virtually unbeatable. Players attempt to battle through a tournament in order to win the legendary Beyblade championship and can upgrade their Beyblader as well as the Beyblade itself as they earn Bey Points and experience along the way.

Players start by pulling the ripcord and attempting to control the top by making it spin into the massive battle bowl. By changing direction and invoking a special attack from the Bit Beast they can try to beat their opposition with the skills they have acquired. There are three different ways to defeat an opponent: knocking them out of the stadium, beating them into submission so they are no longer able to continue, or playing a game of cat and mouse with them until they can no longer spin, thus ending the match. Beyblade also gives you two complete ways to play the game where you can either enter a tournament or take part in a free battle.

Licensed by d-rights to Nelvana, Beyblade is an enormously popular animated television show. It is the 2nd highest-ranking kids program on cable with Males 6-11 and Males 9-14. It is also a hugely successful toy based on customisable, high performance tops that compete. An extreme sports experience where every fan can become an active competitor, Beyblade requires strategy to build and customise battle equipment in pursuit of becoming the World Beyblade Champion.
Companies: Atari Nelvana
People: Jeremy Wigmore
Games: Beyblade VForce: Super Tournament Battle