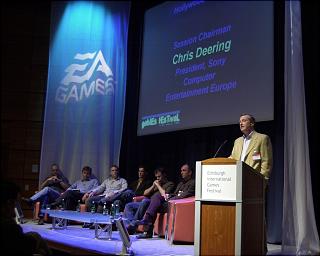 The inaugural Edinburgh International Games Festival (EIGF), which came to a close on the evening of Monday August 18th, has been declared an enormous success, with the public event selling out and the industry conference attracting strong representation from a wide variety of creative industries.

The Festival consisted of two distinct parts; the 'Go Play Games' public event (which ran from August 11th to 18th and allowed Edinburgh festival-goers an opportunity to sample the latest in interactive entertainment) and a one-day industry conference which took place at the Edinburgh International Conference Centre on Monday, August 18th.

Go Play Games was notable not only for its strong attendance, but also for the fact that Nokia chose the event to unveil its forthcoming N-Gage Game Deck to a consumer audience for the first time.

The conference programme covered a wide variety of subjects, from the inks between games and other creative industries (notably TV and film) to the barriers which have, to date, restricted the penetration of the games business to one-third of UK households. Highlights included the debunking of the myth that 'games are bigger than Hollywood' by Capital Entertainment Group's Seamus Blackley, the 'Music, Innovation or Imitation' session, which saw a number of composers from the fields of interactive entertainment, TV and cinema - including Harry Gregson-Williams (Shrek, Phone Booth, etc.) and Barrington Pheloung (Inspector Morse, Truly Madly Deeply, etc.) ? outline how games soundtracks will evolve to drive interactive narrative and 'Hollywood or Bust', which examined the growing links between cinema and games.

The Hollywood or Bust session was also notable as it featured exclusive filmed interviews with John Cleese and Pierce Brosnan in which they talked about their work on the forthcoming Electronic Arts game, Bond: Everything or Nothing.

The event culminated in a light-hearted debate, which saw Konami's Pro Evolution Soccer voted the greatest football game of all time by a passionate audience after a lively, hard-hitting and often hilarious discussion, hosted by veteran football pundit Danny Kelly.

The conference, which generated a full house audience of 300 attendees, attracted delegates from a wide variety of creative industries, including music, cinema, TV and, of course, all areas of game development and publishing.

"I was particularly pleased that the conference programme turned out to be as lively, stimulating and thought-provoking as it did and I firmly believe that the delegates left with a greater understanding of the role and position of games within modern society," says Tom Stone, Festival Chair and Managing Director of LEGO Interactive. "I would like to thank all of the people who worked so hard behind the scenes to make this event the success it was - you know who you are - and also our sponsors and all of the panelists and contributors, without whom we couldn't have got it off the ground. I'm already looking forward to next year's event and am confident that the EIGF has already established itself as a key element of the industry calendar."

The Festival concluded with the presentation of the first ever Award for Excellence and Innovation in Association with Edge, which was awarded to Nintendo's 3D action adventure Metroid Prime. In addition, Sony's Eye Toy walked away with the Games Players Game Award 2003 (sponsored by NVIDIA) which was voted for by visitors to Go Play Games.

"I was pleasantly surprised by the number of comments I received from Festival attendees about the strength of the six-strong Award shortlist," says Edge Deputy Editor and Award Manager Dave McCarthy. "Metroid Prime emerged victorious as everyone on the judging panel was impressed by Nintendo's ability to update a 2D classic in such an excellent fashion, while producing an entirely fresh product which remained true to the original game's core principles."

The EIGF was financially supported by Scottish Enterprise Edinburgh and Lothian and games trade associations, with support from TIGA and ELSPA, and by sponsorship from some of the biggest names in interactive entertainment, including Sony, Microsoft, Nintendo, Nokia N-Gage and NVIDIA.