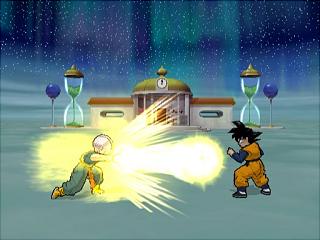 "This new installment in the authentically realised interactive Dragon Ball Z universe draws players further into the high octane world of Dragon Ball Z, so that they really feel like they're fighting in the world of the TV series" said Naoki Eguchi of Bandai Europe. "Dragon Ball Z: Budokai 2 features exciting new gameplay and gorgeous graphics, which will attract and hold DBZ fans' attention like no other DBZ game has before."

With highly detailed cel-shaded graphics, Dragon Ball Z: Budokai 2 features 34 of the toughest, most seasoned heroes and villains from throughout the Dragon Ball Z sagas. Players can battle in eight highly destructive arenas covering five gameplay modes, including Versus, Tournament, Training and the all-new, single-player experience, Dragon Mode, where players join forces with a team of AI-controlled DBZ fighters on a quest to capture all seven Dragon Balls. Fans can perform fusions - the combination of two fighters into one - and play as the mighty villain Buu, who appears in three forms: Maijin Buu, Super Buu, and Kid Buu.

Originally developed in Japan, Dragon Ball-related merchandise has generated over $3 billion in worldwide licensed merchandise. It is among the top-rated series on Cartoon Network and was the number-one rated show among all U.S. cable TV programs for 'tweens 9-14, boys 9-14 and men 12-24 during the 2002 season's launch line-up. For the second consecutive year, "Dragon Ball" was the most searched-for term on the Internet according to Lycos.