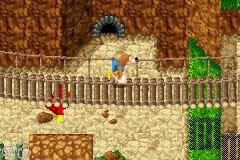 "Rare is one of the leading original content developers in the interactive space," stated Germaine Gioia, vice president of licensing at THQ. "With multi-million worldwide unit sales, Banjo-Kazooie is a perfect addition to THQ's leading handheld catalog. We look forward to working with Microsoft in bringing Banjo-Kazooie and Rare's other new titles to the Game Boy Advance market."

"Rare has made world class games for both console and handheld," said Ken Lobb, studio manager, Microsoft Games Studios. "This agreement with THQ will allow Rare to continue to offer top level content for the Game Boy Advance fans that know and love Rare. I'm really excited that we can bring all of these excellent games to fellow fans of the Game Boy."