Comic book fan? Judge for yourself..... 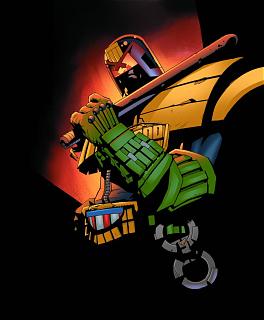 Written by Gordon Rennie, with artwork by Mike Collins and Dylan Teague, the promotion has been secured with super developer Rebellion, who developed the game. GAME.uk.com, the online arm of GAME, Europe's leading specialist retailer of video games and computer software, will publish six parts in this unique series over a four week period, in the run up to the launch of the game.

Judge Dredd: Dredd Vs. Death on the next generation consoles and for PC is based on the legendary Judge Dredd comic strip, published in 2000 AD magazine since 1977. The computer game is seen in the first person as you become Judge Dredd, patrolling the mean streets of the futuristic metropolis, Mega-City One.

In addition to running the comic strip in separate instalments, GAME.uk.com will also be posting in-depth interviews with Rebellion, as well as with the artists and writer of this one-off strip.

Dave Evans, New Media Director said "We are very excited to be able to run this exclusive strip to promote Judge Dredd: Dredd Vs. Death. The unique story will only be available at GAME.uk.com, and further reinforces our commitment to being a specialist retailer, and going that extra bit further for our customers.

"We've tried to achieve this by providing supplementary features to support the release of the game and the comic, such as downloadable demos, multiple screen shots of game footage and extensive interviews for all Judge Dredd fans."

Jason Kingsley, CEO and Creative Director of Rebellion, said "We are delighted to be involved in this imaginative promotion with GAME - this high level of support for Judge Dredd: Dredd Vs. Death is a real vote of confidence in the game. We have always tried to emphasise that the game is based directly on the comic, and draws all of its inspiration from that source, so using a comic strip from some of 2000 AD's best writers and artists to promote the game in such a high profile arena is something that makes a great deal of sense. I can't wait to read it when it's published!"