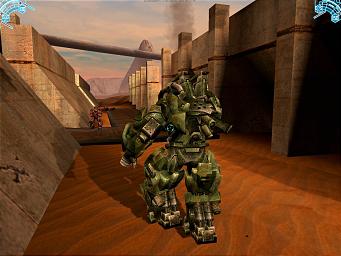 The Xbox version is in development by Tantalus and Legend Entertainment (an Atari studio) in concert with Epic Games. The game is being modified and tweaked to create better than ever performance and controls specifically designed for the Xbox.

In the game, players jump into the scarred combat boots of a grizzled lawman of the future to battle a torrent of bizarre alien creatures and hard-hitting enemy soldiers. The mission: win a brutal galactic race to collect powerful artifacts and stop a malevolent plot to awaken an ancient power. The player will be dispatched to unique worlds with exotic new settings that range from stunningly realistic outdoor terrain to spine-chilling alien cities, archaeological dig sites and more.

The player will be armed with a devastating arsenal, ranging from familiar alien-bashing favorites like the Rocket Launcher and Combat Assault Rifle to all new exotic alien variants modified by your cantankerous ship's engineer. Those weapons will come in handy versus a large bestiary of creatures, including the fearsome Skaarj from the original Unreal along with a host of all-new enemies, such as the Drakk and the Izarians.

Unreal II: The Awakening for Xbox will include a robust multiplayer component both on- and off-line. Two players will be able to join forces in splitscreen co-op mode to battle through the epic single player campaign as a team of mercenaries. Online play will be supported through Xbox Live! and will feature an all new class-based, team-oriented multiplayer mode.

Under the hood lays the latest Unreal technology from Epic Games, creating the best graphics available on any system. The advanced particle system creates the illusion of blazing fire, drifting smoke and weather effects. Enemies in the game use new AI to find cover during fire-fights, work together in teams and react believably based on the caliber of weapon the player is carrying.