Atari introduces Magic: The Gathering - Battlegrounds for Xbox and PC 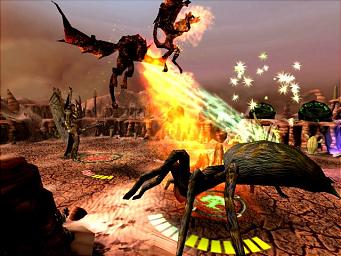 Under license from Hasbro Consumer Products, Atari has announced plans to take one of the most popular trading card games ever created to the Xbox videogame system from Microsoft with the release of Magic: The Gathering - Battlegrounds. A PC CD-ROM version of the game was also announced. Currently in development by Secret Level, Magic: The Gathering - Battlegrounds is filled with faithful translations of classic creatures, spells and enchantments from the premier trading card game in a visually stunning 3D game environment rife with real-time strategic fighting, devastating wizard arsenals and intense creature combat.

"Magic represents one of the best game franchises ever created, constantly evolving and always offering something new to challenge and entertain players. When we approached this project we asked ourselves how we could expand the Magic experience interactively to match - the answer: by making it real-time and providing significant Xbox Live! support," said Jean-Philippe Agati, senior vice president and head of Infogrames, Inc.'s Los Angeles studio. "Magic: The Gathering - Battlegrounds is like no other Magic game to date - it is incredibly fast-paced, eye-popping in full 3D and filled with more strategic fighting action than you can shake a stick at. What's more, we've gone to great lengths to deliver Xbox Live! features allowing players to compete against friends worldwide, track their stats and rank as well as download new creatures, spells, arenas and more."

Created by award-winning game designer Richard Garfield and published by Wizards of the Coast, the Magic: The Gathering trading card game made its debut in 1993. Today, there are more than six million Magic players worldwide. The card game itself is played between two or more players who attempt to reduce each other's score from 20 to 0 by utilizing the various creatures, spells, artifacts and more in a series of offensive and defensive maneuvers.

Just as in the Magic card game, in Magic: The Gathering - Battlegrounds players will choose a duelist and up to two of Magic's five colors -- red, green, white, blue, and black -- to attempt to reduce their opponent's life to zero. Of course, getting an opponent to zero will not be easy, players will have to utilize lightning reflexes, strategic brilliance and, on occasion, raw power to overcome an enemy.

An important aspect to Magic: The Gathering - Battlegrounds will involve the player's mastery of the five colors in the development of his/her duelist. Each color has a proficiency at certain types of activities, such as attacking, defending and healing. Players will be able to select up to two colors and utilize creatures, spells and enchantments in any combination from those schools. For example, a red duelist may choose to augment the attacking powers of his Lava Dragon by adding powerful green enchantments to his arsenal or increase his resilience by using white's restorative powers instead.
Companies: Atari Hasbro Secret Level
People: Jean-Philippe Agati
Games: Magic: The Gathering - Battlegrounds