Warthog have won the Ernst & Young Young Entrepreneur of the Year award for the consumer products category. 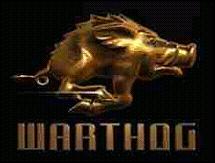 The award was given at the Northern Region finals last week in Leeds and was presented to Warthog's Managing Director, Ashley Hall, in honour of the company's international success in video games.

This comes on top of last year's presentation of the esteemed Queen's Award for Enterprise to the company as well as being nominated for the Entrepreneur award for the last two years running.

Ashley Hall is described by his colleagues as a 'serial entrepreneur' and his achievements include the launch and sale of two businesses prior to the creation and flotation of Warthog Plc.

The judges noted he had achieved good growth in a tough and competitive market and had done well with large and sophisticated customers. They felt he had consistently demonstrated true entrepreneurial flair, and had also developed his company to the point where it was AIM listed and capable of making a rights issue in difficult stock market conditions.

"It is a great honour to accept this award and to be recognised for success at home and in the US having just acquired a studio there. These awards put games companies like Warthog up against the most competitive companies, in the most competitive industries in the UK but we still win through," commented Ashley Hall.

The major international awards programme founded by Ernst & Young seeks to identify and recognise the achievement of outstanding entrepreneurs within successful growing, dynamic businesses. It celebrates commercial success, recognising the benefits that entrepreneurs and their entrepreneurial spirit bring to the economy in terms of job creation and the UK's competitiveness.

Globally recognised as the business "Oscars", the awards are co-sponsored by London Stock Exchange, The Times and UBS Wealth Management and the programme is now in its fifth year in the UK.

The award comes just as the company's much anticipated cross-genre game 'Mace Griffin Bounty Hunter' gets its US release by Vivendi Universal Interactive on PlayStation 2 and Xbox, the game will be released in Europe in August.
Companies: Warthog
People: Ashley Hall
Games: Mace Griffin: Bounty Hunter