Do not exceed the stated dose

Mindscape announces the release of Painkiller for PC in October. 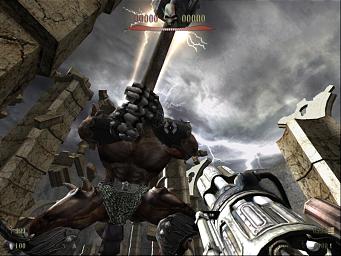 Offering exceptionally strong pain relief, Painkiller is an easy to swallow, first-person shooter with a powerful combination of gaming ingredients that targets the site of pain fast, allowing computer gamers to get on with their lives.

Painkiller will be released by Mindscape in October for the effective relief of the symptoms of adrenaline addiction and features fast-paced, first-person horror gameplay in a world somewhere between Heaven and Hell.

The 'kick' in the Painkiller formula is the fast and frantic gameplay. Painkiller allows players to shoot anything that moves and, once killed, the souls of enemy monsters can be consumed to increase player health. Once shot to pieces, monsters and objects leave gold coins behind which allow players to upgrade speed and weapons as well as maps and numerous other 'power ups' between levels.

Painkiller contains 19 unique single-player levels, with virtually no regurgitation of texture, each comprising a staggering average of 350,000 polygons. The levels are illuminated through both static and dynamic lighting, including accurate 'real world' light using a light distribution model that creates photorealistic ambient lighting and separate real time lights for enemies, objects and weapons. All the levels also incorporate advanced vertex and pixel shaders, including water, glass, volumetric lights and fog.

Painkiller features 20 different enemy monsters, each with their own unique behavioural patterns and attacks. Enemies are formed from a whopping 3,000 to 4,000 polygons each, with up to 8,000 for boss monsters, and animation is skeleton-based, allowing for damage area detection.

Finally, Painkiller's adrenaline-numbing effects give an extra punch in multiplayer mode. Painkiller developers, People Can Fly, are Quake world champions and fully appreciate what makes a truly great multiplayer game. As such, up to 32 players have been allowed for across five multiplayer modes including 'Deathmatch', where the player takes on the world; 'Team Deathmatch'; 'People Can Fly', a modification of Deathmatch 'one on one' with rocket launchers; 'Voosh', where all players have the same weapon and 'The Light Bearer', which assumes that Quad damage never wears off. The multiplayer modes really are hardcore.

With all these powerful ingredients, it's going to be difficult not to become addicted to Painkiller this October.

Adults, the elderly and young persons over the age of 15: Play Painkiller, with a drink of water. Repeat every four to six hours as required. Keep Painkiller out of the sight and reach of children under the age of 15. Do not play if you are allergic to Painkiller or if you are breast-feeding. DO NOT EXCEED STATED DOSE.

Painkiller will be published for PC by Mindscape in October 2003, price Ł29.99.
Companies: Mindscape
Games: Painkiller