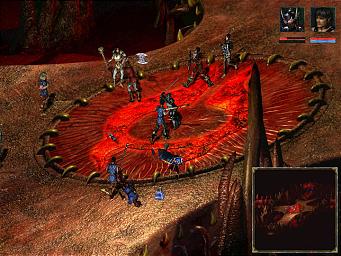 Belgium developer Larian Studios today announces the first details of their upcoming RPG, Riftrunner. Based on the award winning fantasy universe first introduced in Divine Divinity, Riftrunner is set to capture the imagination of RPG players yet again, and provides a strong stepping stone for the planned extension of the Divinity World.

Development on Riftrunner secretly started last year and has been borne by the demand from the legion of Divinity fans. Development is nearing completion, and the timing is set for the official announcement. Riftrunner will be part of the growing Divinity Universe, which will also include Divinity 2, later next year.

Divine Divinity won awards and accolades worldwide after its launch in 2002. Its huge fantasy world, strong storyline, unparalleled levels of interactivity, and unique character development system captured the hearts of RPG players. The feedback from these players convinced Larian Studios that their efforts were worthwhile, and they should continue.

Swen Vincke, Project Leader, says, "Riftrunner is a continuation of the Divinity Universe. We've had thousands of true fans that loved Divine Divinity, who came to our forums and voiced their appreciation, and subsequently have craved for more. Riftrunner has been developed with these fans in mind.

Using an enhanced version of the Divinity engine, and incorporating suggestions from the fan base, Riftrunner focuses on the strengths of its predecessor. Featuring a strong and compulsive storyline, a random quest generator, a new and unlimited character development system, and the unique interactive environment, Riftrunner is appealing to the true RPG fanbase. Other enhancements include 3D character animations, a new combat system and the introduction of a party. The main focus during Riftrunner's development was to extend the RPG experience and universe.

The Quest Continues In Riftrunner, you become soul-forged with a Death Knight. Your fate is to spend the rest of eternity bonded to this creature of evil, unless you can undo this curse. You and your unlikely partner embark on a great adventure to unlock the secret of rift-running your only answer to this life of darkness.

Riftrunner is due for release in Q4 2003 for PC CD-ROM. A Macintosh version will follow later.
Companies: Larian
People: Sven Vincke
Games: Beyond Divinity