US and UK competitors slug it out in 11 hour American Conquest marathon. 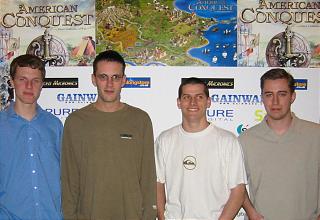 The finalists
In CDV's epic and unprecedented re-creation of the American War Of Independence, its worldwide tournament based on the blockbuster RTS American Conquest, the colonies emerged triumphant once again, as the USA's two modern-day competitors defeated the UK's top duo in a long and arduous battle.

This 11-hour finale was the culmination of two months of battles across the globe as the 640 players who entered CDV's American Conquest Tournament were whittled down, through regional leagues and knockout phases, to the final four contestants.

Robert Haxton, aka Xanthippus, and Lee Laycock, aka [AAC] Tiger, won through the earlier rounds of the tournament to qualify for the trip out to Los Angeles and to represent the UK for the final showdown. In LA, they faced Jacob Gay, aka RikkiTikkiTavi, and Richard Purvis, aka Aurelian, representing the USA. The four competed not just for a share of the $20,000 bounty, but to win the title of American Conquest War of Independence Champion. National pride was also at stake ? in addition to the individual final, the four also battled it out in a team event, US vs UK, to see if these modern day generals could rewrite the history books.

In the round-robin individual final, the two US players topped the table and faced off in a grueling head-to-head match, in which Richard defeated the tournament favourite Jacob 2-1 to be declared the overall winner.

In the team event, the vsitors put up a strong fight and gained an early lead, but it was the home team of Richard and Jacob that repeated the famous victory of their countrymen nearly 200 years ago.

Exclusive to the winner of the American Conquest Tournament, and worth a staggering Ł2,750, kindly provided by www.theOverclockingStore.co.uk, the Advanced Micronics Diafanis 'Black Ice' AXP32 additionally features an AOpen nVidia nForce2 mainboard, plus Western Digital storage, Logitech cordless input coupled with the de facto standard in enthusiast gaming surfaces, the [H]ard:OCP's own RatzPad GS and all topped off with a fantastic AG NEOVO 'Hard Glass' LCD monitor!

The PC RTS game American Conquest is published by CDV Software and is available now. A real time strategy game on a vast scale, American Conquest traces the battles of US history from the moment Columbus set foot on America to the American War of Independence. Players shape the destiny of the continent through over 50 missions spread across eight campaigns.
Companies: CDV
Games: American Conquest