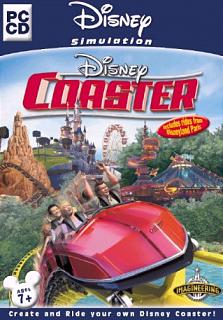 Have you ever climbed off Space Mountain at Disneyland Paris and it has inspired you to want to build your own ride? Well, now's your chance to show Mickey and friends exactly how to create an exciting roller coaster when Disney Coaster is released on May 16th, for PC.

Disney fans and roller coaster enthusiasts of all ages will get the chance to build and ride their very own Disney-themed, real-time, photo-realistic 3D rides. Filled with authentic Disney backdrops and props, players can take on the role of a Walt Disney Imagineer as they attempt to complete missions created by real Disney designers.

Disney Coaster introduces users to the thrill of making Disney roller coasters in settings such as Toontown, Frontierland, Tomorrowland and Main Street. Players can customise each creation utilising more than 60 props based on actual rides, buildings, streets and landscapes found exclusively at Disney theme parks from around the world.

Each ride is made even more exhilarating with new features, such as triggers, which activate sound effects and prop animations like fireworks and the Invisible Track, to give the impression of soaring through the air.

There are 15 objective-based roller coasters to complete that must meet requirements established by Disney Imagineers. Assignments focus on storytelling and recreating world-famous Disney attractions with a personalised touch, such as Space Mountain with the lights turned on. Players who want let their imagine run riot can participate in Free Form Building Mode which lets gamers create their own fantasy Disney attraction, from kid-friendly rides in Toontown to extreme roller coasters in Tomorrowland.

Once finished, Disney Coaster allows players to feel the adrenaline rush of riding their creation through world-famous Disney environments and viewing it from several different camera angles. A panel of Disney's most beloved characters, including Mickey Mouse, Minnie Mouse, Donald Duck, Daisy Duck, Goofy and Pluto are available to provide feedback and serve as judges. The characters amusingly rate elements, such as top speed, ride length and vertical G force, with reactions ranging from wild enthusiasm to discerning disapproval.

The game boasts some of Europe's leading roller coasters in Disneyland Resort Paris with over 50 rides, shows and attractions and is guaranteed to keep you buckled into your seats.