Wresttling, Thieving and Tomb Raiding - it's all going on, and then some. 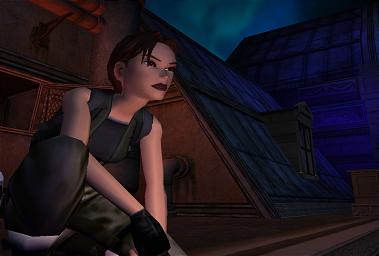 Eidos Interactive, one of the world's leading publishers and developers of entertainment software, announces its groundbreaking console and PC games line-up for the upcoming 2003 Electronics Entertainment Expo held May 14-16 in Los Angeles, California. Eidos will feature several games in South Hall booth No.824 including Lara Croft Tomb Raider: The Angel of Darkness for PlayStation2 and PC, Backyard Wrestling: Don't Try This at Home for PlayStation2 and Xbox, Deus Ex: Invisible War for Xbox and PC, Commandos 3: Destination Berlin for PC and Republic: The Revolution for the PC.

In addition, Eidos will debut several new titles at the show including Ion Storm's Thief, Crystal Dynamics' Legacy of Kain: Defiance and Chain Gang; and The Italian Job, based on the upcoming film release from Paramount Pictures.

"Eidos' partnerships with companies such as Paramount, Sony, and Microsoft are testament to the company's capacity to create strong content that has mass appeal across multiple entertainment mediums," says Rob Dyer, president of Eidos Interactive, US. "Eidos' fully loaded 2003 E3 lineup is an impressive combination of both groundbreaking content and industry-leading technology."

At E3 2003, Eidos reinforces its dedication to developing platform-leading, content-rich brands. Among the games highlighted during the show are:

Backyard Wrestling: Don't Try This At Home (PS2, Xbox) - Based on the controversial and shocking US phenomenon of Backyard Wrestling, Backyard Wrestling: Don't Try This At Home breaks gamers free from the stale wrestling genre, and puts them into a groundbreaking new world of open-ended gameplay. Punish opponents in highly interactive sprawling environments implementing instruments of pain, including thumbtacks, barbed wire, light bulbs, stop signs, baseball bats, tables, fire and the environment itself. Prepare to endure inhuman amounts of pain, take incredible risks, and leap from breathtaking heights to squash opponents and be crowned 'The King Of Hardcore'. Developed by Paradox.

Chain Gang (PS2, Xbox) - Chain Gang unleashes total animal anarchy! Chained together, Spanx and Redmond are animal fugitives on the run from an unscrupulous product-testing lab. Playing as Spanx, you must use the disgruntled Redmond as a weapon not only to escape, but also to free other enslaved animals and sabotage the evil corporation. Providing an innovative approach to the character-based action genre, Chain Gang combines a unique 'chain' gameplay mechanic with in-depth enemy and environment interaction, rich combat and slapstick humour. The result? Player choice triggers an unscripted chain of chaotic, humorous events. Developed by Crystal Dynamics.

Commandos 3: Destination Berlin (PC) - Commandos 3 Destination Berlin is the third instalment in Pyro Studios' legendary tactical strategy series. The game takes the stunningly detailed graphics and compelling gameplay of the series to a whole new level with a new interior engine, a strong narrative and a new game structure with more detailed smaller maps providing more action orientated missions. The gameplay incorporates new gaming situations including ambushes, assaults, level bosses and promises to be more accessible than previous games in the series. For the first time in a Commandos game, there will be a deathmatch multiplayer mode for up to eight players via LAN and the Internet.

Deus Ex: Invisible War (Xbox, PC) - Deus Ex: Invisible War is the sequel to Ion Storm's award-winning Deus Ex. This first person thriller with intense shooter and stealth gameplay elements begins 15 years following the events depicted in the original game. Playing as anti-terrorist agent Alex D., you must take advantage of the open-ended gameplay to fight numerous militant factions bent on violently reshaping the world to suit their own agendas. Equipped with high-tech gadgetry and bio-mods that can induce superhuman powers, travel the globe chasing the conspirators, those out to get you and the truth behind your own origins.

The Italian Job (PS2, Xbox, GameCube) - Based on Paramount Picture's forthcoming feature film, The Italian Job puts you in the driving seat as you and your band of thieves attempt to steal $28 million in gold bullion from under the nose of the man who betrayed you. This high-octane arcade racer will get your adrenaline pumping as you attempt a frantic getaway in super-charged new Mini Coopers. Create havoc on the streets of LA as you drive at break-neck speeds through environments based on locations in the film including the Hollywood Hills, Downtown LA and the city's Metro and storm drain system.

Lara Croft Tomb Raider: The Angel of Darkness (PS2, PC) - The gaming world's most famous heroine, Lara Croft, like you've never seen her, in a Tomb Raider like you've never experienced. Lara returns as both hunter and hunted relying on her ingenuity, athleticism and a new edge to her personality. The game introduces a new playable character, Kurtis Trent, and new gameplay features including interaction with other characters and the capacity to improve Lara's abilities depending on how you play the game. You must traverse an intricately detailed world, taking you from the back streets of Paris to the hellish depths of Prague. The Angel of Darkness employs a brand new engine built from the ground up to fully utilize the power of PlayStation 2 and the latest PC graphics cards. Developed by Core Design.

Legacy of Kain: Defiance (PS2, Xbox) - Legacy of Kain: Defiance is the next installment in the multi-million selling Legacy of Kain series. For the first time in the series both Kain and Raziel will be available as playable characters in all of their blood sucking and soul devouring glory. The game focuses much more on combat as Kain and Raziel confront hordes of monstrous enemies in fierce, fast-paced battles. The completely 're-vamped' combat system promises to be accessible, responsive and satisfying, allowing for non-stop action and thrilling combo moves unique to each character.

Republic: The Revolution (PC) - Republic: The Revolution is the highly anticipated and critically acclaimed PC strategy simulation game from Elixir Studios. Designed by Demis Hassabis, Republic: The Revolution delivers a totally unique and compelling experience powered by one of the most advanced graphics engines ever. Starting with a single loyal supporter, a tiny secret HQ and a very small base of local support, you must build up a nationwide party powerful enough to oust the President and rule the Republic of Novistrana.

Thief (Xbox, PC) - In this next chapter of the Thief series, you once again take on the role of the master thief Garrett. The stealthy character is rarely seen, never caught, a master of the ambush and capable of breaking into the most ingeniously secured places. Garrett steals from the wealthy and gives to himself, making his living in the dark and foreboding City. Although Garrett would prefer to be left alone to ply his trade, the prophecies of an impending Dark Age dictate a different plan for the thief. Thief pioneered the concept of stealth and this latest instalment will feature Ion Storm's groundbreaking dynamic lighting and shadow systems - every character and object, including Garrett, cast realistic, movable shadows that affect the gameplay.
Companies: Core Crystal Dynamics Eidos Elixir Ion Storm Paradox Pyro
People: Rob Dyer
Games: Backyard Wrestling: Don't Try This At Home Commandos 3: Destination Berlin Deus Ex: Invisible War Lara Croft Tomb Raider: The Angel of Darkness The Italian Job Whiplash