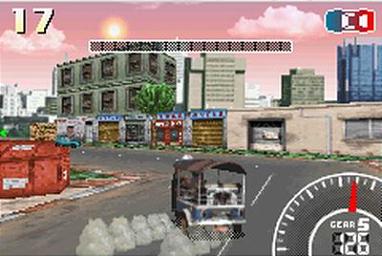 Atari is bringing all of the action and intrigue of the Hollywood stuntman to the Nintendo Game Boy Advance with Stuntman, the handheld follow-up to the smash PlayStation 2 computer entertainment system hit of the same name. Developed by the same team that created the graphically amazing V-Rally 3 for Game Boy Advance, Stuntman is scheduled for release in June 2003.

Stuntman thrusts players into the middle of Hollywood-style action-packed films, challenging gamers to complete death-defying stunts in a series of six blockbuster films. In their quest to build a career as an A-list stunt driver, players will travel to movie sets around and complete each stunt with absolute precision or face the wrath of a disappointed director. By completing stunts, the player earns money and moves on to bigger and better gigs. Top stunt drivers will unlock bonus items, such as jumps, burning hoops and stacked vehicles that can be used in the game's fully customisable "Stunt Arena."

The game includes two main modes of play, Career and Arena. In Career, players will move from film to film, building their reputation as a top Hollywood stuntman and unlocking additional levels and other extras. Arena mode challenges gamers with a stadium style stunt show, including precision driving tests and jumping trials. Arena mode also features linked play for multiplayer gaming. Ten high-performance and unique vehicles will be at the player's disposal for more than 20 stunts, including American muscle cars, ordinary street vehicles and the Bangkok-inspired Tuk-Tuk.

Stuntman for Game Boy Advance continues the successful Stuntman franchise by providing gamers with an action/driving experience never before seen on a handheld console. The game incorporates fresh game situations and 3D environments rendered with even more detail than the graphically groundbreaking V-Rally 3 for Game Boy Advance.