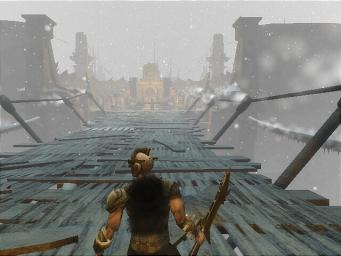 Vultures
All Images (3) »
CDV Software Entertainment has announced its line-up of titles on display at this year's Electronic Entertainment Expo (E3) in Los Angeles. For the sixth year in a row, CDV joins the cream of the games business at the Convention Center for the hottest game show of the year.

"We are very excited about our 2003 release schedule, as among other things this year marks CDV's crossover to the console market, and for the first time we will display our two Xbox titles, Vultures and The Kore Gang", says Anita Rodic, CDV's PR Manager UK.

Breed (PC)
One of the most eagerly awaited PC Games this year, Breed, from British developers Brat Designs will be the centrepiece at CDV's booth. The 3D action shooter will be presented by the developer himself.

Breed is a cutting-edge science fiction shoot 'em-up, which skilfully blends addictive, accessible, free-roaming gameplay with state-of-the-art technology to expand not only the gameplay potential, but also the player's perceived freedom within the game world.

Blitzkrieg (PC)
The 3D perspective, World War II-based, real time strategy game Blitzkrieg, by Nival Interactive from Moscow, will be published on May 16. Blitzkrieg will test the gamer's strategic expertise to the limit. It requires finesse, precision, a command of military tactics and sound man-management techniques. Your troops, if commanded skilfully, will gain experience and fight more effectively.

The title has just been honoured by PC Zone with an 'Essential' award.

No Man's Land (PC)
This thrilling 3D realtime strategy game from developers Related Designs has been compared to Age of Empires. The gamer discovers the New World from the first colonies through settling the Wild West and engages in action-packed missions with surprising story twists. The title features a brand new multiplayer game, the railway construction challenge and six cultures with individual strengths and weaknesses, as well as heroes and elite units.

Vultures (Xbox)
Beat 'em up Vultures from Swedish developers Grin Inc features action-loaded gladiator fights in a fascinating real-time scenario. Cinematic 3D graphics make full use of the advanced properties of the Xbox. In Vultures the gamer lives the hard gladiator life: in different arenas and with classical or modern/futuristic weapons at his disposal the gladiator has to defeat his enemies in a duel in order to survive. The aim is to win to become undefeated champion of the Vultures. Realistic character animation through high-tech motion capturing and more than 16 different gladiators with individual fighting styles and 25 different 3D arenas full of deadly traps make this title one to watch out in 2003.

The Kore Gang (Xbox)
This jump'n'run game from UDS & Zoink features three freaky characters, Pixie, Madboy and Rex, who have to face bizarre opponents in wild scenarios. By putting on the Core-Suit they make the most of their individual skills: Pixie can use it to climb better than anyone else, Madboy can really pack a punch, and Rex's excellent hearing and sense of smell turn him into a walking radar station.

The Kore Gang is the first game ever with character-dependent viewpoints and songs that are integrated into the story. The Tim Burton-like cool graphics are stunning and immerse the player in its 24 tricky levels over six worlds.

CDV's complete showcase of products will be featured at E3 in Los Angeles, CA, at booth #6015 in the Kentia Hall.
Companies: CDV
People: Anita Rodic
Games: Armed and Delirious Blitzkrieg Breed Codename Panzers: Phase One No Man's Land: Fight For Your Rights The Kore Gang Vultures