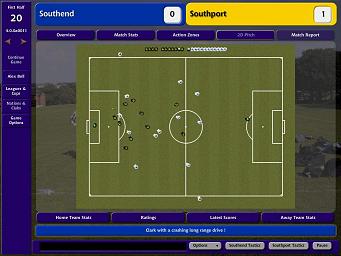 Juventus, the current Serie A champions, have boosted their (excellent) chances of winning a second successive Scudetto by adding another huge name to their already stellar roster of international talent. This new signing is not another household name player, but the best-selling football management game, Scudetto 4 Championship Manager.

The latest version of the best-selling football management game was released in Italy on Thursday, April 17th 2003.

In a deal brokered by Eidos' Italian distributor, Leader S.p.A., Scudetto 4 logos will appear in a number of high-profile locations around Juventus' legendary home, the Stadio Delle Alpi. These locations will include the advertising hoardings, the player tunnel and the post-match interview boards.

In addition, the Scudetto 4 logo will feature prominently in each of this season's remaining match programmes and on the official Juventus website, www.juventus.com.

"This deal with Juventus will expose Scudetto 4 to a huge audience in Italy," says Chris Mehers, Export Sales Manager at Eidos Interactive. "And with Juventus being one of the best-known names in world football, this agreement will also reinforce Championship Manager's strong standing amongst the global base of football fans."