Konami of Europe celebrates the 100th anniversary of the world's most famous cycling event with special release. 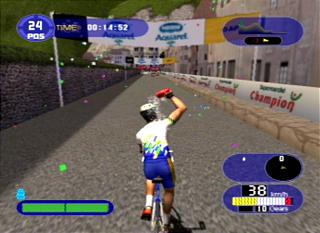 Konami of Europe is to celebrate the 100th anniversary of the legendary Le Tour de France cycling competition with an all-new simulation of the racing tournament for PlayStation 2. Entitled Le Tour de France: Centenary Edition, the game will be released to coincide with the 2003 tournament.

Le Tour de France: Centenary Edition is the most true and complete simulation of the tournament possible. Boasting a comprehensive roster of officially endorsed riders and teams, the Centenary Edition has been overseen by Konami of Europe's Product Development team's expertise and builds upon last year's initial Le Tour de France title, with the addition of new game features, enhanced tactical elements and six new tracks painstakingly modeled on those of the 2003 Tour de France.

Players are invited to participate in Arcade, Time Trial or two-player 'Head-to-Head' modes, or opt for the grueling and much-improved 'Career' mode. This charges them with steering a young rookie entrant to victory after victory, accruing the prize money needed to improve the training systems available to them, gain sponsors for future tournaments, and ultimately building their reputation as they strive to secure the coveted 'Maillot Jaune' yellow jersey worn by race winners.

This level of detail is also extended to the game's controls. Cyclists can now access a tuck move to gain extra speed or lean back to slow down and improve their turning, while an all new pedalling system has been incorporated, and is affected by the racer's stamina levels. The team side of the tournament is also recreated, with cyclists ordering teammates to deliver energy-boosting drinks, or shielding them from the wind in key racing scenarios.

Le Tour de France: Centenary Edition is abound with gameplay-enhancing touches, and is the definitive simulation of the event - and its enhanced visuals, utter realism and exhilarating gameplay make it the ideal way to celebrate the landmark anniversary of one of the most respected sporting tournaments in the world.
Companies: Konami
Games: Le Tour de France: Centenary Edition