The Italian Job gets the American Plaudits

SCi announce that Electronic Gaming Monthly, the number one multi-format games magazine in the US, has voted The Italian Job PSOne Game of the Year. 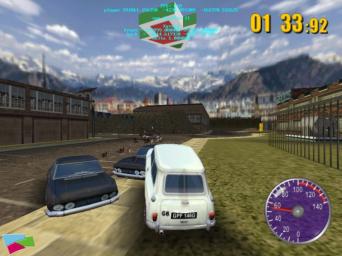 This award is a combination of the editorial team and readers votes, with The Italian Job receiving 60% more readers votes than the second placed game. In summarising the award, Electronic Gaming Monthly commented on the game "?.one of the best movie-inspired games ever to hit PSOne"

Based on the 1969 cult classic movie starring Michael Caine and featuring the legendary Mini Cooper, the player takes the role of Charlie Croker, recently out of jail and on the make again, is attempting to steal $4,000,000 worth of gold in broad daylight and from under the noses of the Turin Polizei and the Mafia. There are a total of 6 playing modes, with the players thrashing the 3 Austin Mini Coopers and 11 other vehicles around 2 massive, free form areas - London, Turin and the Alps. Road, off-road and rooftop driving all feature in the game that delivers the ultimate mix of high-speed pursuit and thrilling chases.

The Italian Job went straight to number 1 upon it's release in the UK and has subsequently achieved Platinum Status, meaning that it has sold over 250,000 units across Europe. The game has been published in the United States by Take Two and, more recently, SCi has secured a distribution deal for the game in Japan with Capcom, one of the world's leading games publishers.

Bill Ennis, Commercial Director of SCi Games Ltd said, "we are delighted that SCi have won yet another award. This further highlights our commitment to creating a strong portfolio of extremely high quality titles."
Companies: SCi
People: Bill Ennis
Games: The Italian Job