Introducing the game of neighbourhood nastiness and community commotion! 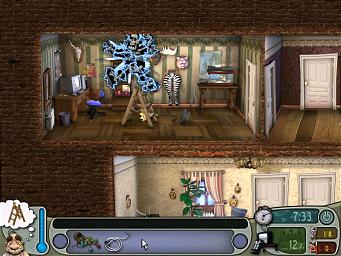 All Images (3) »
This innovative title is currently in development for PC CD-ROM and will be released later this year.

Neighbours From Hell sees players take on the role of Woody, as he performs ever more fiendish tricks upon his evil neighbour, tiptoeing from room to room in an effort to avoid being seen by his neighbour's watchful pets. Setting each trap requires precise timing and a healthy dose of cunning, creativity and skill.

Vip Patel, Managing Director of JoWooD Productions UK Ltd. said: "Neighbours From Hell is a hugely entertaining blast that's phenomenally accessible, testing players' skills in setting up the perfect trap and is a hugely enjoyable challenge for gamers of all ages."