It's a Wonderful Life for Ubi Soft and Natsume 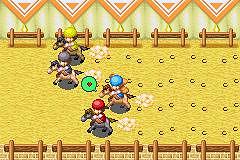 All Images (2) »
Ubi Soft Entertainment, one of the world's largest video games publishers, announced today an exclusive agreement with Natsume Inc. to distribute Harvest Moon: A Wonderful Life on the Nintendo Game Cube and Harvest Moon: Friends of Mineral Town on the Game Boy Advance. The agreement will cover all PAL territories and is expected to ship on both formats in October 2003.

"Ubi Soft is looking forward to distributing the delightful Harvest Moon games later this year. The series has a loyal following and a well-deserved reputation for top-quality gameplay" Commented Sally Cormack, Product Manager for Ubi Soft "The latest titles will bring many exciting new elements to the series"

Hiro Maekawa, President and CEO of Natsume Inc. stated, "With the strength and dedication of Ubi Soft's powerful sales force we feel that the Harvest Moon franchise will become a household name in all PAL territories. Once again we are truly excited to be working with such a reputable and industry leading company as Ubi Soft!"

For the un-initiated Harvest Moon is a farming sim, but no ordinary farming sim. Your stint on the farm will span a lifetime during which time you must find a good woman and raise a family.

The Nintendo Game Cube version includes over 40 brand new characters to interact with as well as new and improved systems for raising animals and growing vegetables. Meet and woo one of the lovely bachelorettes in town, each one with their own individual personality and harness the power of science to grow hybrid vegetables.

The Game Boy Advance version will take place in Mineral Town and is based on the world and characters from Harvest Moon: Back to Nature, build and maintain a farm while befriending the town's people.

The Nintendo Game Cube and Game Boy Advance versions will link up to connect the two towns featured in the games, it will also enable villagers to travel between the towns triggering new events and many surprises.
Companies: Natsume Ubisoft
People: Hiro Maekawa Sally Cormack
Games: Harvest Moon: Friends of Mineral Town