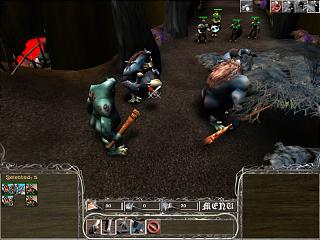 Octagon Entertainment, Inc., the video game industry?s leading agency, today announced an agreement to represent Primal Software to find a worldwide publisher for Besieger, a 3D real-time strategy game set in a medieval fantasy world. Besieger is in development for PC and is scheduled to be completed Q3 2003.

Besieger introduces a world filled with feudal rivalry in which players can wage war as either Viking or Cimmerian warriors. Contenders can build flying vehicles for combat or siege towns on horseback in an effort to conquer factions such as Ogres, Werewolves, Centaurs, and other non-human races. The armored walls of a barricade can be shattered using a battering ram and competitors can pocket enemy buildings and equipment. Players can also retreat and accumulate forces behind their own armored citadel for a counterattack.

Besieger is story-based and players must complete quests to determine the outcome of the story. Progressive economics allow players to spend resources constructing 40 types of buildings and honing over 50 different units for battle. Workers are created without cost to the player but must be trained for fighting and other special skills. This experience and fighting efficiency carry over as levels are defeated.

The game includes multiplayer options via Internet or LAN, which allows up to 16 players to compete by ?All Against All,? ?Capture the Artifact,? ?Siege,? and ?Tactical Combat.? Players will also be able to design game extensions and new maps using tools provided by Primal Software.

?I am very pleased to be representing Primal Software. Besieger is a fabulous game and I am confident that we will secure a solid deal for it in a timely manner,? said Octagon agent Jerod Kirby.