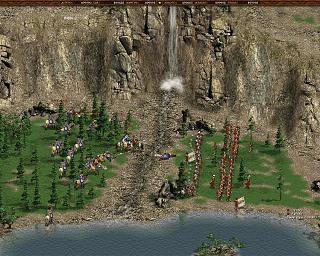 All Images (3) »
CDV Software Entertainment UK has upped the ante in its virtual War of Independence (www.war-of-independence.com) by doubling the amount on offer to entrants. Thanks to the generosity of the sponsors - The Overclocking Store, Pure Digital, Saitek, Gainward and Logitech - the total value of prizes available to players competing in this prestigious online tournament has now topped an astonishing $20,000 - the largest ever offered by CDV to its players.

The tournament now kicks off today (21st February 2003) and will see up to 5,000 players battle it out across three leagues until April 7th. Then, the leagues will split and the top 24 players from England and America will pair into their respective Premier Leagues and compete until the two best have been identified. This duo will then move on to the grand final - which takes place in Los Angeles - where amazing prizes can be won.

Yes, the two best representatives from the UK will be whisked away on an all-expenses-paid trip to Los Angeles to compete head to head against the best American competitors. Beat the Yanks, and the glory is theirs - along with some superb prizes. Bounty on offer includes Gainward Ultra/750 8X XP Golden Sample 128Mb Graphics cards, Videologic ZXR-550 65W 5.1 speakers, Sony DSC-P72 Digital Camera, Saitek P3000 Wireless Pad and Docking Stations and an Advanced Micronics DIASANES AXP32 PC for the overall winner, worth an astonishing $4,000.

"The event keeps getting bigger and bigger," says Leo Zullo, marketing manager, CDV Software Entertainment UK, "and we're hoping this increased prize fund will convince more people to enter. Now is the time for the greatest strategy players in the world to prove how good they are. It's time to start the war."

"We are delighted to play a part in this ambitious tournament," says Paul Dutton, Communications and Engineer Director, The Overclocking Store.

"Along with the other world class sponsors who have pledged support to CDV and its thrilling American Conquest: War of Independence Tournament, we're really looking forward to congratulating the winner whoever he or she is. Although as our awesome systems such as the coveted DIASANES Series - 'Black Ice' AXP32TM from Advanced Micronics are acknowledged as truly the very 'Best of British', The Overclocking Store secretly wishes the UK competitors all the hard-charging, strategic best!"