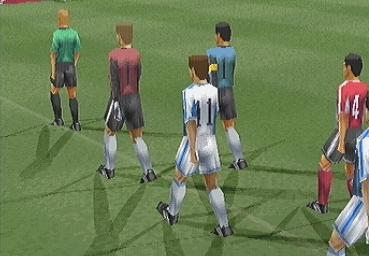 All Images (5) »
Konami of Europe returns to the football field with Konami Computer
Entertainment Osaka, Inc (KCEO)?s International Superstar Soccer 3 (ISS3)
running out for PlayStation 2 in March, with a version for the Nintendo
GameCube following in May.

Designed as a companion title for Konami?s world-renowned Pro Evolution
Soccer series, ISS3 is a more arcade-orientated game than its stable-mate.
Featuring a full selection of volleys, passes, flick-ons and rasping shots,
ISS3 pits more than 90 FIFPro-endorsed international and club squads against
each other in a variety of friendly and tournament matches. ISS3 also breaks
new ground with the inclusion of a ?Mission Mode? wherein victorious players
are awarded points after every match or by betting on the outcome of a
two-player game, which can be used to build stadiums and unlock a wealth of
special options and features.

ISS3 also extends this innovative approach to its on-field play, with KCE
Osaka debuting an all-new ?Close-Up? mode. During the course of a match, an
icon will flash above the head of a player as he nears the edge of the
opposition?s penalty area. On pressing L1, the game seamlessly zooms in on
the attacking player, changing the view to directly behind him and giving
the user more control over his actions. By holding down the R2 button on the
controller, feints, spins and skill moves can be used as ISS3 players
attempt to beat defenders in their way, while the ?Mission Mode? also holds
the key to a number of additional tricks and moves.

The true beauty of ISS3, however, is its ability to grow with the player.
While the controls are designed to introduce novice fans to the football
genre, the intuitive use of passes, through-balls and first-time shots means
that precision one-touch play is also possible, while the individual stats
attributed to each of the instantly recognisable football stars can also be
used to the player?s advantage.

The game also benefits from the most detailed visuals in an ISS title to
date. KCE Osaka has ensured that the sport?s most famous names are instantly
recognisable both in terms of appearance and trademark moves, with key
players particularly adept as free kicks, while others enjoy enviable
distribution skills and can make seemingly impossible defence-splitting
passes with ease.

With its four-player mode, professional commentary and stadium
announcements, ISS3 is the most accessible yet entertaining arcade football
title to date. Its deft moves, intelligent player AI and incredible visuals
and sound combine to create a truly immersive and always entertaining
football title guaranteed to leave its rivals trailing in its wake.

ISS3 will be released for PlayStation 2 in March, and GameCube in May.
Companies: Konami
Games: ISS 2 International Superstar Soccer