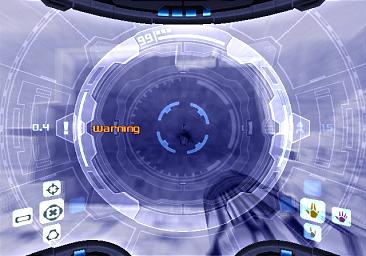 All Images (3) »
Nintendo and Retro Studios have combined their creative genius to bring the video game event of the year, the long awaited release of Metroid Prime, exclusive to Nintendo GameCube. March 21 marks the European launch of this blockbuster title, and the return of Samus Aran, the ice-cool bounty hunter who'll once again lock horns will the evil Space Pirates. Metroid Prime has already received outstanding reviews in the US, selling a staggering 250,000 copies within one week of its release. Early reviews of Metroid Prime indicate it is set to take Europe by storm and live up to its billing as one of the best games of all time. A tall order indeed, but with the legendary status of its predecessors, each one somehow building on and bettering the last, there is every reason to believe that Metroid Prime will do exactly that!

Super Metroid on SNES saw Samus Aran saving the day as she prevented the evil Space Pirates and Mother Brian from letting the Metroids loose on Planet Zebes. Now, 8 years later, Metroid can be experienced like never before, in glorious, full 3D with all the action taking place from an amazing 1st-person perspective. Players actually get to step inside the famous power suit and experience the game through Samus' eyes, as though they are the great bounty hunter herself! This viewing perspective not only revolutionises the look of the game in a way never thought possible, but it is also essential to the gameplay.

Players can explore and examine the vast environments down to the smallest detail with the scanning ability of Samus' face visor. The visor also helps to target and lock onto enemies allowing for laser-point accuracy in the heat of fierce alien battles. With Samus' vitals such as health, ammo levels, map and weapons selections all displayed on the inside of her visor, the player never need remove themselves from the gameplay, making Metroid Prime one of the most immersive gaming experiences ever!

Atmosphere has always been a key feature of the Metroid series and Metroid Prime doesn't disappoint. Samus finds herself on the lonely world of Tallon IV tracing what she suspects to be Space Pirate activity. This takes her from the lush Tallon overworld to the ancient Chozo Ruins, snow-covered Phendrana Drifts and the lava-filled Magmoor Caverns. Each incredible environment is filled with unique enemies and obstacles. This not only helps to differentiate between sections, but it provides a rich and varied experience. In terms of audio, Metroid Prime is second to none. Supporting a full Dolby Pro-Logic II soundtrack, each environment is perforated with atmospheric sound effects and an eerie musical score.

The name of the game in Metroid Prime is survival! Throughout the course of her exploits on Tallon IV, Samus will have to search for numerous weaponry upgrades, in order to progress and also to tackle certain enemies. These include Super Missiles, Ice Beam, Thermal Visor, Flamethrower, Space Jump Boots and many more. The beauty of Metroid Prime is the constant discovery of new items and weapons that will allow players go back and overcome previously impassable sections.

Metroid just wouldn't be Metroid without the inclusion of Samus' incredible ability to roll herself into a small ball, the Morph Ball, and squeeze through the unlikeliest of spaces. To accomplish this, the game seamlessly leaves the normal 1st-person perspective and players take control of the Morph Ball directly from a 3rd-person perspective. This smooth and effortless transition not only looks and feels amazing, but is one of the many key features that sets Metroid Prime a cut above the rest in terms of presentation, control and above all gameplay.

And that's not all. For the first time, two of Nintendo's Metroid titles will connect. By completing Metroid Fusion for Game Boy Advance and Metroid Prime on Nintndo GameCube, then linking them together via the Nintendo GameCube Game Boy Advance link cable, gamers will be able to open two features:

2. By completing Metroid Fusion and then linking to Metroid Prime, gamers can unlock the original Metroid from the NES and play this on their Nintendo GameCube.

As one of the key must-play games on the Nintendo GameCube, Metroid Prime is set to join over 100 superb titles already available on the console. So start 2003 as you mean to go on, with some serious action, adventure and excitement - Samus is coming?
Companies: Nintendo Retro Studios
Games: Metroid Prime