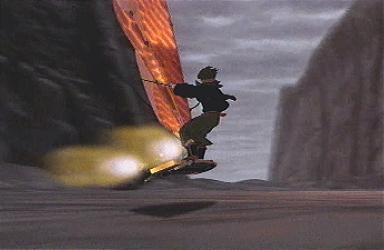 Softimage Co., a subsidiary of Avid Technology, Inc. today announced that its SOFTIMAGE|XSI system, the industry's leading 3-D nonlinear production environment, was the tool of choice for all the modeling, texturing and animation work for Disney's much anticipated new game: Treasure Planet. Based on Robert Louis Stevenson's 'Treasure Island', Disney's new game for the Sony PlayStation 2 adds a futuristic twist to the classic tale and creates a new epic adventure of bloodthirsty pirates and buried treasure in which the spaceship, 'Legacy,' is overrun by mutinous pirates led by the cyborg John Silver.

Scheduled for UK release on 31st January 2003, Treasure Planet was developed entirely by Bizarre Creations, a leading games house based in the North West UK. Bizarre Creations chose the SOFTIMAGE|XSI environment for its ease of use, its ability to be integrated into the company's existing pipeline, and its productivity enhancing features, including the animation editor, polygon modelling, skeleton tools and texture editor.

The development team at Bizarre found that using the SOFTIMAGE|XSI software resulted in an efficient and productive pipeline that helped create a visually stunning game which emulates the imagination-fuelling power of the original story.

Tone Brennan, producer at Bizarre Creations comments: "If, like us, you want a totally capable package that can handle all aspects of creating artwork for your game, a package that works as your artists think, then look no further. SOFTIMAGE|XSI is so elegant and easy to use that our animators never had to fight and waste valuable creativity time with complex pop-up boxes containing masses of values to tweak. The power comes from the simplicity of the tools and their ease of integration into the workflow."

After Disney provided Bizarre Creations with characters and reference artwork, the development team used the dotXSI exporter in the SOFTIMAGE|XSI software to easily develop the backend of the game. The open nature of this format enabled Bizarre's programmers to export models, animation, and textures and even customise games specific materials and shaders into the game, which were used to produce the different games levels, and the actor-based game play system.

The team at Bizarre worked extensively with the SOFTIMAGE|XSI software's polygon tools for character creation which they found were comprehensive, easy to use and created a streamlined workflow.

Commenting on the animation tools in the SOFTIMAGE|XSI environment, Brennan says: "The animation power of SOFTIMAGE|XSI is unmatched. The software is designed to fit the way we think: you never have to fight with it to get results. Skeleton tools are fast and to the point, allowing you to really zip through the process of building rigs and weighting envelopes. We are also using constraints more and more and find them very powerful, easy to set up and control."