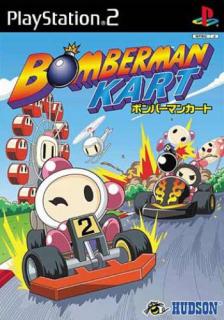 Konami of Europe is delighted to announce the first fruits of its acquisition of leading Japanese developer Hudson Soft, with the release of Bomberman Kart for PlayStation 2 in Q1, 2003. The publisher will also be unveiling additional Hudson titles, with Pinobee for PSone and Pinobee and Phoebee for Game Boy Advance to follow later in the year.

Starring Hudson's legendary Bomberman character and a host of his explosive-toting cohorts, Bomberman Kart pits them against each other in a high-speed racing scenario. Spanning 16 circuits and boasting five playable characters, players must ensure their racer is the first past the post using whatever means necessary. To this end, a series of weapons can be collected during the course of the race, including missiles, turbo boosts and the old Bomberman favourite: cherry bombs!

Bomberman Kart also benefits from a huge array of game modes. In addition to the no-holds-barred Grand Prix mode, the Battle Mode encourages racers to KO their opponents in a classic 'last man standing' challenge, while the Time Attack mode uses a ghost rider that is updated every time a lap record is broken. Additional modes also include the off-road Challenge Game, the supersonic-themed Speed Race and a multitude of sub-games in the Random Challenge section, where four players are invited to compete.

In a nod to the Bomberman character's longevity and heritage, Bomberman Kart also includes the original game for the first time on PlayStation 2. Originally created for the now defunct PC Engine system in the late 80s, Bomberman is a classic arcade title. Players control the titular hero as he attempts to clear a series of levels of monsters. Bombs are used to clear a route and take out adversaries, additional bombs can be collected, while icons to extend the radius of the detonation or slide bombs into position are also available. However, as the number of bombs grows, huge explosive chain reactions follow - leaving fewer and fewer places to hide safely!

The multi-player mode that helped establish Bomberman as a classic title is also revisited, with up to four players selecting a character and using all their skill and cunning to wipe out the other players in order to lift the coveted Bomberman Cup.

Bomberman Kart marks a welcome return to one of video gaming's greatest heroes - while the new karting scenario further demonstrates the versatility of Hudson's bomb-happy character as Konami of Europe re-introduces him to an entirely new audience.

Said Kunio Neo, President for Konami of Europe: "We are delighted to be introducing Hudson Soft into the European market. Like Konami, they have an excellent pedigree for creating playable and entertaining games, and they will both strengthen and extend an already formidable 2003 roster of titles for Konami of Europe."