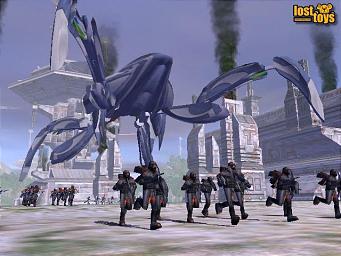 Battle Engine Aquila, developed by Lost Toys and published by Atari, is a fierce and frenetic shooter that puts players at the helm of the most advanced war machine ever created ? the Battle Engine Aquila. The Battle Engine features an impressive and visually stunning arsenal of pulse cannons, micro missiles, spread bombs and much more, each critical to prevailing in the game?s continuously evolving warzone.

With modifiable weapon load outs, selectable wingmen and a host of allied troop, tank, air and sea craft support, the Battle Engine presents players with a near endless variety of options with which to overcome opposing forces. While certainly the most powerful weapon in existence, the Battle Engine cannot win the epic war alone and therefore the player must carefully choose where to engage in battle to support the allied forces.

Releasing in January 2003 on the PlayStation 2 and Xbox entertainment systems, Battle Engine Aquila is now supported with a robust website at www.battleengine.com, which features the game trailer, downloadable and streaming game play movies, screenshots, character bios, weapon and vehicle stats and much more.