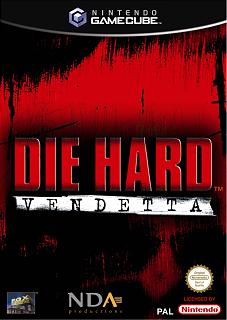 Bits Studios can today confirm the news that all Game Cube owners have been waiting for - its brilliant first-person action adventure Die Hard: Vendetta, published by NDA Productions, a studio of Vivendi Universal Publishing, will hit stores across Europe on November 15th and the rest of the world very soon after.

The game, which has been in development for over two years, continues the Die Hard series with an original adventure set after the last movie, Die Hard: With a Vengeance. Players will be treated to a stunning array of set-pieces, tense stealth missions and explosive gunfights - all set within a fully interactive gaming world - as they play as Sergeant John McClane battling to free his kidnapped daughter from a terrorist faction.

Current review scores include a 92 per cent from G-Force, and 8/10 from Official Nintendo Magazine, with similar press reactions expected the world over. An advertising campaign across five European territories - UK, France, Germany, Italy and Spain - will kick off next week, and will include heavyweight media presence across key European countries, including TV, web and printed press advertising campaigns.

The game boasts full lip-synching and dialogue localisation in each of the five languages, throwing players throughout the continent headfirst into one of the most realistic movie experiences on the console. Bits' proprietary multi-platform, technologically advanced game engine, TWED, demonstrates the power of the Game Cube, with some stunning set pieces which include helicopter battles, colossal explosions and a return to the Nakatomi Plaza - scene of the first Die Hard film.

"Die Hard: Vendetta has been a challenging project, but the results have been more than worth it," says Foo Katan, CEO, Bits Studios. "Although it's an original story, the game boasts an unmistakable Die Hard feel. Players really will feel what it is like to be John McClane in an adventure which could have come straight from the silver screen."

Dominique Cor, CEO of NDA Productions, says "Die Hard: Vendetta is NDA Productions' first title to be released, which makes it very special for us. This game is promised to be a great success in Europe, thanks to the amazing team that has developed the game for 2 years now. At NDA, our ambition is to find the most talented development studios in Europe to bring tomorrow's best sellers to gamers. Die Hard: Vendetta will surely be one of these best sellers"