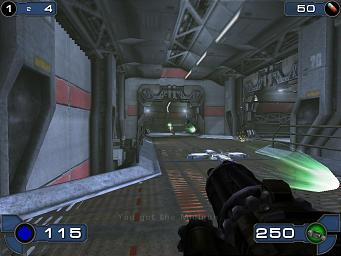 All Images (5) »
Shutter the windows and stock up on caffeine! Atari's Unreal Tournament 2003 for personal computers, one of the most anticipated video game sequels ever, invaded the charts as the #1 PC product, excluding expansion packs, for two weeks following shipment on September 28. Developed by Digital Extremes and Epic Games, the game is the follow-up to the 1999 smash-hit Unreal Tournament, which won Game of the Year honors and became the multiplayer game of choice for amateur and professional gamers alike.

'This game is what PC gamers have been clamoring for all year long,' said Jean-Philippe Agati, senior vice president and head of Infogrames, Inc.'s Los Angeles studio. 'Fans of the original Unreal Tournament and players new to the experience will be blown away by the amazing gameplay and the mind-blowing graphics. Beautiful environments dripping with intricate detail, detailed character models and unbelievable special effects light the way as Unreal Tournament 2003 lays claim to the throne its predecessor held as Game of the Year.'

During the first two weeks the game was available, September 29 to October 12, Unreal Tournament 2003 ranked as the #1 PC game, excluding expansion packs, according to NPDTechworld.

Unreal Tournament 2003 thrusts gamers back into bloodthirsty, action-packed arenas as the ultimate techno-gladiator of the future. Using the latest in Epic's Unreal technology, the game redefines multiplayer action with up to 32 players in a server with lightning fast net code. The technology is augmented by the advanced and renowned Karma math engine for in-game physics that simulates true-to-life character movement and environmental interaction.

'Unreal Tournament 2003 is the perfect sequel it takes everything that was great about the first game and improves on it with new gameplay types, weapons and unbelievable graphics,' said Tim Sweeney, founder of Epic Games. 'Digital Extremes and Epic have worked together to deliver a game that completely lives up to the expectations and track record set by the original in 1999.' James Schmalz, founder and creative director of Digital Extremes, adds that 'seeing the resounding success of the game at retail is the ultimate reward for the team at Digital Extremes and Epic that spent long hard hours making sure it was truly a worthy successor to the original.'

The game features more than 35 indoor and outdoor environments, rendered in exquisite detail and crammed with volumetrically lit particle systems and more than 100 times more polygons per frame than the original game. Some original levels such as Curse have been recreated and redesigned and are joined by all new arenas like the sinister Inferno and the massive and snowy Kalendra.

Keeping with the franchise history, Unreal Tournament 2003 stocks players' combat arsenals with a smorgasbord of ferocious, flesh-chewing weaponry. The armory includes fan favorites from Unreal Tournament like the Flak Cannon, Shock Rifle and a retuned Rocket Launcher as well as all new and twisted innovations like the Link Gun, Ion Cannon and totally redesigned Sniper Rifle.

Classic play modes that made the original Unreal Tournament great, like Deathmatch, Capture The Flag and Team Deathmatch revive old frag-hungry appetites while completely original and exciting styles of play like Domination 2.0, Survivor and Bombing Run create a new thirst for blood and stress teamwork over individual excellence.

'Our artists, programmers, level designers and audio technician did a top notch job on Unreal Tournament 2003,' said James Schmalz, founder and creative director of Digital Extremes. 'And, seeing the resounding success of the game at retail is the ultimate reward for the team at Digital Extremes and Epic that spent long hard hours making sure it was truly a worthy successor to the original.'

Players can select from up to 48 individualized characters, each with unique abilities and origins, to play as or against. Each character model is created with unprecedented detail utilizing high polygon counts and high resolution textures. Player abilities are enhanced with special game moves, such as double jump and the dodge move. Collecting Adrenaline from around the arenas will enable further power-ups like health regeneration, invisibility, increased damage and increased speed.

As with all Unreal products, the fan community is well supported with development tools bundled into the game software. Amateur mappers and development teams will find the redesigned Unreal Editor to help them build custom maps and modify the game to create their own gameplay modes. Unreal Tournament 2003 tools also include pre-fabricated sections of architecture to make level design and construction easier.