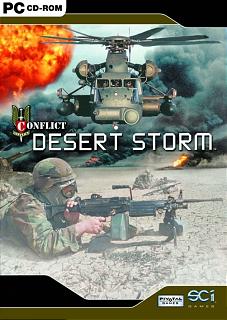 The International EMMAs (Electronic Multimedia Awards) recognise excellence in digital media content creation through the acknowledgement of best practice. They are respected for their independence and impartiality and are widely recognised as the most prestigious interactive media awards. The awards are organized in conjunction with an international steering committee comprising experts from all sectors of the industry. SCi's latest video game hit, Conflict: Desert Storm has been nominated in the category of 'Games - Console' and will be judged by an international jury, in Toronto, Canada. The winners will be announced during an online presentation that will take place on the 28th November at 3pm. A series of special celebration events will take place following the announcement of the winners.

Conflict: Desert Storm is based on the 1991 Gulf War and is 3rd-person squad-based action, where the player takes control of an elite SAS or Delta Force Unit. Behind enemy lines, the player infiltrates barbaric enemy territory and neutralise key targets. The game, which was released simultaneously for Xbox, Sony PlayStation 2 and PC platforms in September 2002, topped the UK video game charts and has received much praise from all sectors of the video games industry.

To authenticate the gaming experience and ensure that Conflict: Desert Storm set new standards of realism, the game's developers, Pivotal Games, enlisted the services of Cameron Spence. An ex-member of the 22nd SAS Sabre Squadron, with experience behind Iraqi enemy lines before the Ground War started, Spence provided first hand perspective as a Reality Consultant. Pivotal Games used his knowledge to ensure that the detail of weaponry, terrain, squad tactics, enemy behaviour were all exacting. Additionally, the game's benchmark Artificial Intelligence ensured that all the soldiers and enemies acted as they would in real situations.

Marketing Manager, Justyna Cielecki added "It's a dream come true for SCi. Not only has Conflict: Desert Storm reached the top of the charts, the EMMAs recognition is yet more evidence of how the game has pushed the boundaries of the genre, as well as being a significant step forward in games design. It's already set a precedent for future titles under the Conflict brand".
Companies: Pivotal SCi
People: Justyna Cielecki
Games: Conflict: Desert Storm