Ancient Greece is rocked by Will Rock 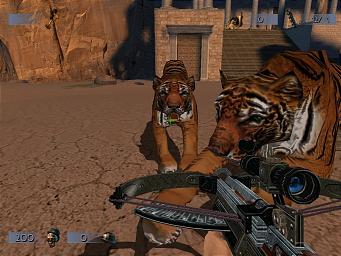 All Images (3) »
Ubi Soft, one of the world?s largest video game publishers, today announced it has signed a worldwide deal to publish Will Rock for the PC. Developed by Saber Interactive, this visually stunning FPS takes gamers on a fantastic journey back to Ancient Greece to face mythological enemies. Will Rock's proprietary next-gen, 3D engine and unique weaponry allow for innovative gameplay including melting, inflating and shattering both enemies and the environment. Will Rock is scheduled to ship to retail shelves in Q1 2003.

?Will Rock?s frenetic, fast-paced action combined with its superior technology and innovative weapons will thrill FPS gamers? said Chuck Yager, producer. ?Its Ancient Greek/Roman setting gives a unique look to the standard first-person shooter, and allowed us to create some fun, original gameplay that combines puzzle solving with intense action.?

Will Rock's story centres around Willford Rockwell (aka Will Rock), an unlikely hero whose body is inhabited by the spirit of a defiant Titan. Launched into a fantastic adventure through time, Will arrives in Ancient Greece where he must battle some of mythology?s most powerful foes.

Players will experience fast-paced shooter action through 10 huge varied levels and additional expertly designed multiplayer maps. The Ancient Greek/Roman setting allows for unique weapons that support the game?s theme, including a Medusa Gun, Flaming Crossbow and Acid Rifle. The game?s "real-time shattering" technology allows for a wealth of breakable objects, providing gamers with the experience of a truly interactive environment. With Will Rock?s advanced gameplay technology and level design, players must rely on both quick thinking and reactions to solve environmental puzzles and survive the hardcore action!
Companies: Saber Ubisoft
People: Chuck Yager
Games: Will Rock