Everything you wanted to know about Chase 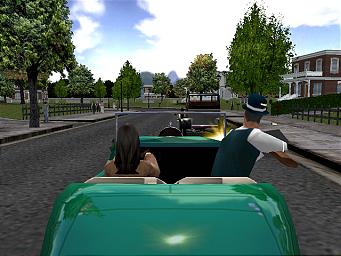 All Images (5) »
Question: Please describe your game
Answer: Chase places players in the exciting world of Hollywood movie stunt car action. With four unique movie sets and a variety of vehicles unlike any other game, Chase promises heart-pounding action and spectacular movie-style special effects. Players will have to hit their marks as they attempt jumps, smash through props and race through the set in order to please the director before moving onto the next action packed stunt.

In the game, players will take the role of Chase Corrada, a young sexy stuntwoman, who is starting her promising career as a movie stunt driver. Chase will take players through four unique movie sets including a gangster movie setting, a post-apocalyptic movie set and more. Players will not only drive traditional four wheeled vehicles, but will also have motorcycles and a three wheeled Ramen delivery Tuk-Tuk at their disposal.

Q: Does the game include multiplayer modes?
A: Chase has 3 multiplayer modes. The Stunt Challenge allows you to compete for points doing flips and spin in the air. The Stunt Race is a round the track race with jumps on the route. Hit & Run is a fun tag mode in which players have to avoid being tagged.

Q: What separates this game from others in its genre?
A: Chase combines driving with multiple objectives to achieve great gameplay. The objective system rewards players for completing different stunts in each scene. Players can replay a scene to complete stunts that they have not yet achieved. This system is a fun alternative to your everyday racing game and gives the game plenty of replayability.

Q: What technical challenges did you face on this project?
A: We had to move the game from a PC platform to the Xbox platform. With the Xbox being such a powerful console we had to add a lot of technology to our game, such as real-time reflections, characters that steer the cars etc. This meant it took us a great deal of time to make the most of the Xbox?s abilities but it was well worth it for the results we achieved.

Q: How have you found working with this Xbox?
A: Xbox is a fantastic platform to work on. Not only is it the most developer friendly console, but Microsoft also has a superb support infrastructure. The Advanced Technology Group at Microsoft are always on hand to give suggestions on getting the best out of the Xbox and improving your game technologically.

Q: What parts of the game are you most proud of?
A: That's a tough question, but if I had to pick I'd say the Post Apocalyptic movie, because the Dune buggies really show off the physics. In addition to the stunt objectives, this is what makes the gameplay so much fun - so we are definitely proud of that.

Q: What were your influences on this project?
A: We took our main inspiration from movies such as the original Gone In 60 Seconds, the James Bond films and Ronin.

Q: What products have the team previously worked on?
A: Chase is I-Imagine's first project and the first console game developer in South Africa.