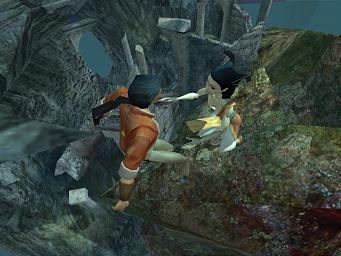 All Images (2) »
In a timeless age of vast sea voyages, magic and swashbuckling adventure, Galleon puts you at the helm of the streamlined clipper Endeavour. You control Rhama; Captain, Buccaneer, Merchant and explorer of uncharted oceans. Rhama will lead you into a stunning 3D adventure game set in a mysterious world which bustles with invincible skeleton warriors, spooky shipwrecks, breathtaking pirate battles and epic legends of Gods and folklore.

The game begins when Rhama is summoned to the port town of Akbah by a famous healer. A series of unexpected events starts him on an incredible quest centred around the discovery of a mysterious boat. Picking up clues and characters along the way, Rhama struggles to unravel the complex strands of the mystery as he battles his way from island to island.

Developed by Toby Gard and Paul Douglas (the team responsible for the creation of one of the most tangible video game characters ever - Lara Croft) Galleon will be the new benchmark in 3rd person action adventure games. Using a proprietary animation system Galleon's characters will have access to an unprecedented array of actions and movements. Fluid, realistic movement and ultra responsive gameplay are brought together in an environment populated by convincing ancillary characters.

Rhama will be one of the most agile computer game characters ever made, able to run, leap, climb, swim and swing his way across the wild untamed islands he discovers. Galleon also boasts a completely unique sword fighting system and incredibly realistic enemies to fight.

Anticipated for release in spring 2003, Galleon promises to be the ultimate in 3D-adventure gaming. Would you care to pit your wits and sword arm against Pirates, Slave Traders and the utter scum of the sea? Then hop aboard?the Galleon awaits.
Companies: Confounding Factor Interplay
People: Paul Douglas Toby Gard
Games: Galleon