Wage war against the forces of darkness in the magical medieval epic Arx Fatalis. 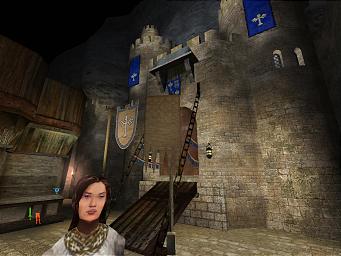 All Images (5) »
Dare to enter another dimension, defeat demons and prevent the summoning of a diabolical deity as JoWooD Productions introduces the completely immersive medieval fantasy, Arx Fatalis, to the realms of first person RPG's this September.

The mysterious world of Arx has been shrouded in darkness ever since the sun disappeared in the year 226 and the son of King Poxsellis moved the whole city underground into the dwarf mines. There are over 40 different races that co-habit the mines including goblins, dwarves, ratmen and giant spiders and tension between them all is building. Now the evil cult of Akbaa seeks to raise a terrifying god to rule the land. Travelling from another dimension and suffering from total amnesia, the player is confronted by a world on the brink of disaster and must save both himself and Arx before the force of evil is summoned to impose his reign of terror.

On the journey of survival and discovery the player must investigate the strange happenings in Arx and slowly unravel the complex story of who he really is. The player will fight inside a deadly underground fortress against numerous foes including goblins, trolls, ratmen and other vicious opponents using a variety of weapons from wooden clubs to powerful swords. But brute physical force is not always enough and the player must master the magical spells contained within the intuitive and powerful rune magic system in order to defeat the cult.

Exquisite attention is paid to the smallest detail in order to provide an intriguing game play experience where fighting and spell casting are implemented in a unique way. Explore underground cities, secret temples, lost civilisations, dwarf mines and discover the magic of Arx Fatalis.

Managing Director of JoWooD Productions UK Ltd, Vip Patel said: "Arx Fatalis is an amazingly immersive RPG. It combines deep, engrossing game play with stunning 1st person graphics. It is a prime example of the quality of games being released by JoWooD"

Arx Fatalis has a SRP of Ł29.99 and is out on September 27th 2002.
Companies: JoWooD
People: Vip Patel
Games: Arx Fatalis