Role-player at number one for a second week. 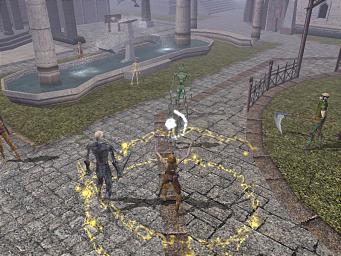 All Images (2) »
For the second consecutive week, Neverwinter Nights from Infogrames, Inc. maintained its #1 spot at the top of the PC Sales Charts for the week ended June 29, 2002, according to NPDTechworld. Other Infogrames titles in the Top 10 were Backyard Baseball 2003 in the #4 slot, and RollerCoaster Tycoon Gold Edition at #10.

The original RollerCoaster Tycoon, which debuted in 1999, was #12 among the top sellers for the week, and the Backyard Sports franchise contributed another strong performer in Backyard Basketball, which closed out the Top 25 in the #25 spot.
Companies: Infogrames
Games: Backyard Baseball 2003 Neverwinter Nights Rollercoaster Tycoon