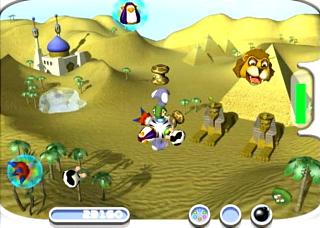 All Images (4) »
A tide of addiction, compulsion, dependence and obsession is due to hit the UK thanks to a tiny floating cube. The innovative ZooCube for Nintendo GameCube and Game Boy Advance is a brain teasing 3D arcade game that truly tests mental agility and reflexes rather than mastery of the controls.

The malevolent Dr. Buc Ooze has gone too far. His controversial research into animal shaping has left creatures distorted into unnatural forms, reducing them to a fraction of their former size. Over the years, as Ooze grew careless, the misshapen menagerie he discarded drew attention to his evil plot. To rescue the animals, the player must use the ZooCube - a machine specifically designed to reverse Ooze's scientific process and restore the animals to their natural state. When the mutated creatures enter the ZooCube in pairs, the shaping effects are neutralized and the animals are teleported to a flying Ark for rehabilitation.

The game's simple premise demands the player to juggle the animal shapes, matching them up using the ZooCube, as they fly towards it from every angle. A game for both the hardcore and the hopeless, it can be enjoyed by a five year old but its elegant simplicity belies its depth; special shapes, power-ups and the increasingly frantic pace of the game add variety and ensure that the challenge remains exhilarating for even the smartest adults.

The powerful ZooCube experience is further enhanced by the game's exploitation of cutting edge visual and audio techniques that make the game as aesthetically stimulating as it is cerebrally challenging. Smoothly animated, detailed 3D graphics combine with staggering music and 3D effects, assaulting the senses with a kaleidoscope of colour, motion and sound.

ZooCube is the creation of Nalin Sharma, founder of PuzzleKings, a company dedicated to producing arcade-style games with the emphasis on playability and longevity. ZooCube is the world-class result of several years of research and fine-tuning; after winning first prize in a competition for his unique concept in leading games magazine EDGE, the ZooCube experience was honed to perfection, creating an intense, original experience that will stand the test of time long after other games have been consigned to the scrap heap. Indeed the game has already won industry plaudits; at industry trade show E3 in May, it was voted best Game Boy Advance puzzle game by IGN.com and best puzzle game for GameCube by PlanetGamecube.com.

ZooCube will be released by Acclaim Entertainment in August, SSP Ł39.99 for the GameCube version and Ł29.99 for the Game Boy Advance.
Companies: Acclaim PuzzleKings
People: Nalin Sharma
Games: ZooCube