Drop those dice and pick up a controller, Baldur?s Gate: Dark Alliance is being released this September on Xbox. 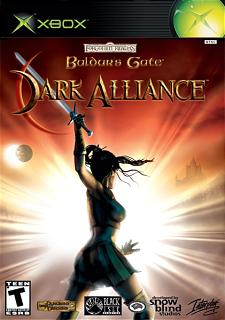 Adventurers who already own Microsoft?s new powerhouse console will soon be able to journey to the Sword Coast and the mythical city of Baldur?s Gate when Baldur?s Gate: Dark Alliance is released this September on Xbox.

Based on the hugely successful RPG board game, Dark Alliance follows on the Baldur?s Gate series with another epic instalment based in the rich fantasy universe of Dungeons & Dragons.

Played from a third-person perspective, Baldur?s Gate: Dark Alliance immerses players in the port town of Baldur?s Gate. A new political intrigue is emerging within the town and rumours of a Thieves? Guild civil war brew in the underground catacombs beneath the city streets. Thrust into this fraught situation, the player finds himself a newcomer to plots and sub-plots therein. They soon learn that they stand in the way of a scheme that threatens not only the city but the entire region.

Furthermore, dramatic new spell effects and powerful new abilities have been included to add to the flavour of the action-packed game and assist the player in combat against the terrifying monsters they?ll encounter on their quest.