Bill Gates' buys into the British motor industry as Titus is set to release Lotus Challenge on Xbox this September. 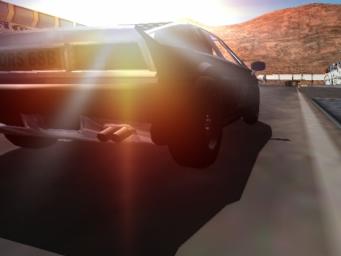 All Images (3) »
Petrol heads who have already joined the next generation of console gaming will be able to get their hands on Lotus Challenge on Xbox when it is released this September by Virgin Interactive.

This isn't just a direct port from PlayStation 2. No, the Xbox version boasts a range of new improvements including modified tracks, enhanced Stunt Challenges and far more player-friendly arcade handling. Most importantly of all, Lotus Challenge on Xbox features the kind of improvement in speed that would enable even Barrichello to win his first race (bar team instructions to the contrary).

Developed by Kuju, Lotus Challenge will afford players the opportunity to drive some of the world's most desirable cars: from the Lotus 7 driven by Patrick McGoohan in The Prisoner, the Esprit driven by Roger Moore as James Bond to the latest Exprit 2002 and this year's amazing new Proton Satria.

As Lotus is renowned for winning on the track, famous racing cars will also feature prominently, with a powerful mix of Formula One and sportscars available to whet the game player's appetite. It will involve not only racing against other much improved computer-controlled cars, but also driving challenges ranging from daring stunts on movie sets, to pursuing other cars through city traffic. Lotus Challenge will mix the adrenaline rush of racing with the challenge of great driving skills from one of Britain's most famous sportscar manufacturers.

Lotus Challenge recreates one of the most complete driving experiences to date. Players can opt for a pure adrenaline rush or a more tactical long-haul race. Each course is set across a variety of landscapes and tracks, and will see players racing around such diverse and amazing locations as London (including Park Lane, Trafalgar Square, Whitehall, St James Park, Buckingham Palace), Hethel (the Lotus test track), Tokyo Rainbow Bridge, Minato-ku, the Tokyo Bay Tunnel, Arizona Speedway and Jupiter Beach Raceway in Florida.

The special effects are particularly outstanding, with rain, storms, snow, fog, dirt and mud all gloriously represented. Advanced real-time particle systems handle the dirt, smoke and damage effects. For instance, drive across grass, wheel spin in gravel or handbrake turn in sand and you'll notice your tyres pick up grit, but work themselves clean after racing for a time. Scrape your Lotus down the side of a tunnel at over 100 miles an hour and see scratches, and dents realistically form on the bodywork. Whilst multi-pass rendering, projected shadow casting and directional light make each frame - and there are 60 of them per second - a work of art.

The Xbox version also pushes the graphics pedal to the metal with real-time shadows and dynamic lighting, best shown off for night time tracks when the car headlights light up the road.

A range of challenges awaits each player - from lapping the fastest, to completing trials or missions. An improved "Story Mode" mixes gaming styles, with players able to choose different characters, each with a different path through the game. These modes are based on the fictional exploits of a world-famous Lotus Challenge Team, which not only race in world championships across the globe, but is also called upon to perform stunts for films and adverts. Players will be able to endure an Italian Alps hill climb, whiz around Hollywood film sets, or take part in a tyre commercial on an Oil Rig. In addition, players can race through rush-hour traffic and fly past speed cameras in the English countryside, ensuring that Lotus Challenge lives up to its name.

A multi-player option is available for those willing to take on others. These are spread across Championships or decided on a single race. Specific modes and challenges result in hidden tracks or cars being unlocked and available for play in any other mode - so once you've finished a particular section of the game, you'll be able to replay it in a faster car, thrashing down lap times in single- or multi-player sessions.

All the Formula One cars featured in Lotus Challenge will be courtesy of Classic Team Lotus representing the Formula One achievements of Team Lotus. The virtual models have been extensively tested by real Lotus test/development drivers, to ensure the game is as accurate as can be. Even the World Famous Lotus Designers have become involved creating two Lotus concept vehicles for inclusion in the game.