GBH kicks off on GBA

Titus Interactive Announce the Release of Barbarian for GBA in October. 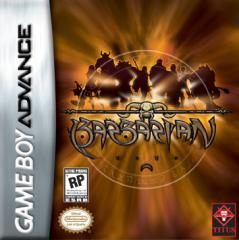 Wielding Anglo Saxon GBH on to 21st Century GBA, Barbarian looks set to become the undisputed heavyweight king of the handheld slash-?em-ups when it is unleashed by Titus Software in October.

Armed with a two-player link cable option and six different game modes including Training, Multiplayer, Survival, Extreme Survival, Time Attack and Quest, Barbarian is a non-stop Octoberfest of combat guaranteed to keep even the most bloodthirsty fighting appetites quenched.

Barbarian features eight different characters, each with their own barbarous moves, weapons and characteristics and a total of eight sprawling arenas. This combination allows players to engage in up to 64 different player/environment scenarios.

Much to the delight of followers of the eight bit original and taking a lifetime to master and only a second to execute, a ?Head Cut? cheat mode has also been skilfully included in the gameplay.