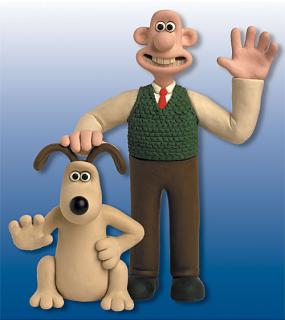 All Images (2) »
BAM! Entertainment is pleased to announce that production of the first next-generation interactive Wallace and Gromit video game is currently underway with renowned games developer Frontier Developments, adding another superb visual dimension to compliment Aardman's much loved duo. Anthony Williams, Managing Director at BAM! commented on the partnership: "Frontier Developments has a long history of creating innovative, original and most of all, immensely enjoyable games. We're delighted the company is on board with this new Wallace and Gromit adventure and look forward to working with the team on creating a game that fans of all ages can enjoy."

Founded by David Braben, co-author of the seminal 'Elite', in 1994, Frontier Developments has a string of hits to its name, including BAFTA award nominee V2000 and the critically acclaimed Elite 2: Frontier. With a wealth of experience, unique animation technology and a pool of talented artists and programmers, Frontier is perfectly suited to the task of bringing Wallace and Gromit to the world of console gaming. David Braben, Chairman of Frontier, said: "We are very pleased to be working with BAM for the first time. We are all huge Wallace and Gromit fans, so it's also a great experience to be collaborating so closely with Nick Park and the teams at Aardman and BAM! Using Frontier's game expertise and animation technology together with Aardman's exceptional skills, we plan to significantly raise people's expectations of visual quality, attention to detail, story and over-the-shoulder experience - together we are working towards a 'landmark' game."

Frontier is working with the production teams of both BAM! and Aardman to ensure that the game captures the unique charm of all three cracking Wallace and Gromit adventures. The close cooperation on artwork, scripting and other aspects of the production will result in the new game benefiting from the charisma of both original and new characters, which is complemented by the humour and magnetism we've come to associate with Wallace and Gromit. Nick Park commented: "Video games are an exciting new medium for Aardman and we're delighted that BAM! and ourselves are working with a studio of Frontier's standing on introducing Wallace and Gromit to a brand new audience. "

The new game, due in 2003 on all leading formats, is a platform adventure featuring new storylines and characters as well as the ever popular and much missed 'stars' featured in previous Wallace and Gromit adventures.

Amongst the game's many challenges, players will rescue young animals from the clutches of mischievous monkeys and thwart Feathers McGraw's twisted and diabolical plan for total zoo domination. Set in an immersive 3D world, the player is cast as Gromit and is challenged to outwit Feathers McGraw and destroy his evil contraptions in order to rescue the young animals. Machine parts, located throughout the game's many testing levels, must also be gathered so that the ever-inventive Wallace can create a marvellous contraption with which to deal the final knockout blow to the dastardly Feathers and his vile plans.
Companies: BAM! Frontier Developments
Games: Wallace & Gromit in Project Zoo