Ecks vs Sever explodes onto PlayStation 2 this fall 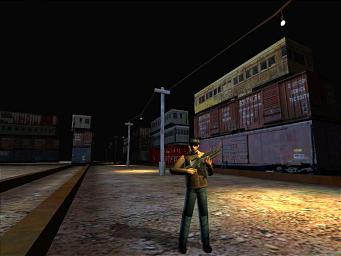 "The action and intrigue of Franchise Pictures' upcoming film made it a property we felt would translate well onto a console," said Alain Tascan, Vice President of Worldwide Product Development for BAM! Entertainment. "The quality of Ecks vs. Sever Game Boy Advance and the excitement over the upcoming film means that players are already invested in these intriguing characters and their world of government conspiracies, and Zombie Studios is the perfect choice as a developer to bring Ecks vs. Sever to life on the PlayStation 2."

The movie stars Antonio Banderas as FBI agent Jonathan Ecks, and Lucy Liu as National Security Agency Operative, Sever. The game will follow the movie's storyline pitting the two spies against each other in a deadly game of cat and mouse. Jonathan Ecks, the FBI agent is hunting Sever, a rogue NSA agent. However, while battling each other, Ecks and Sever learn that they might be fighting the wrong enemy. Faced with a threat greater to each other than themselves, their non-stop battles take place in locations from construction sites and sewer systems, to back alleys, highways, train yards and more.

In the game, players will be entrenched in fast-paced action as they can play as either Ecks or Sever. Ecks and Sever will each have different missions, different strengths and different weaknesses including unique armor, health ratios, and ammunition. With locations modeled after the actual sets seen in the movie, the game offers more than 20 single-player missions, custom multiplayer levels for up to four players, highly sophisticated enemies to battle, and a host of weapons to choose from. Ecks vs. Sever for PlayStation 2 is based on the Lithtec game engine, which is the same technology that drives the well-known PC game No One Lives Forever.

Written by Alan McElroy, the film is being produced by Elie Samaha, Andrew Stevens, Chris Lee and Kaos with Kaos also directing. The film is due in theatres this November. For more information about BAM! Entertainment, Ecks vs. Sever PlayStation 2 or Game Boy Advance, or any of BAM! Entertainment's products visit www.bam4fun.com.
Companies: BAM!
Games: Ecks Vs Sever