Humans battle dragons in a captivating fight for survival in this story-driven action game. 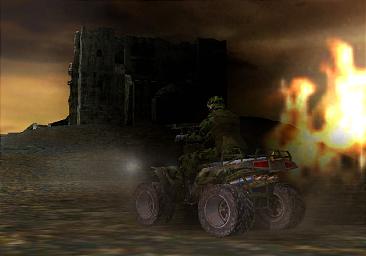 The film stars Matthew McConaughey as an American ex-marine and Christian Bale as a British castle dweller who team up to fight off a brood of fire-breathing dragons. Rob Bowman, best known for his work as director of numerous episodes of the X-Files and X-FILES, the movie, directs the action/sci-fi story based in post-apocalyptic future England. As the story goes, twenty years ago, a group of workmen unwittingly awakened the last of the great dragons from its slumber deep below the Jubilee Line extension to the London Underground. As the film begins, the dragons have emerged from below the city seeking to return to dominance over man after a centuries-long rest. Groups of humans survive and live in whatever buildings and structures have survived, trying to scratch a living and farm from the scarred earth, while avoiding the attacks of roving dragons. Bale's character, whose mother was killed by a dragon many years earlier, is now leading a clan of survivors. Together with McConaughey's character, he hopes to hunt down the original dragon.

Reign of Fire for the PlayStation 2 will follow the movie's story with gamers playing as either a human fighting for survival, or as a fire-breathing dragon out to extinguish the humans. In the game, the player will view the action from a third-person perspective as they start off as a member of a resistance group, the Kentucky Irregulars. The group, which is led by the rough and tumble Denton Van Zan (Matthew McConaughey), hails from the United States. The group has arrived in England based on information concerning the origin of the dragon threat.

They meet up with another group of survivors, whose leader, Quinn Abercromby (Christian Bale), was present as a young boy at the location that the original dragon first arose and whose mother was killed by the beast. Together these groups must defend themselves from the dragon threat and eventually make their way to London and a dramatic final conflict with the ultimate dragon.

Reign of Fire will offer the player spectacularly scorched and devastated landscapes that are a result of the fierce battles between these two species competing for survival. The game will capture the atmosphere and tension of the movie's dramatic feel in a pyrotechnic maelstrom as players view wrecked forts, burned landscapes, destroyed vehicles and more. Reign of Fire will offer reactive music, which will give the game a film-like atmosphere, in addition to showcasing spectacular and realistic fire effects, which are an important and integral part of the game.
Companies: BAM! Kuju
Games: Reign of Fire