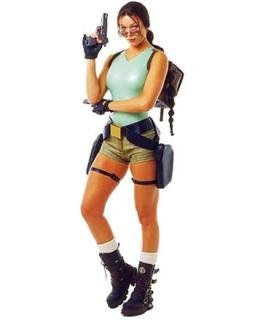 The outfit was auctioned for 10 days on eBay and attracted serious bidders from all over the world.

The lucky bidder who finally secured the outfit was Paul Lai, a successful international tax specialist. Paul says: "It's crazy to think I now own the outfit of the video game industry's first sex symbol. I'm proud to help such a good cause as UNICEF. I don't intend to wear the costume, first I'll have to find a girlfriend with Lara's build!"

The outfit was worn by Nell McAndrew during her 1998/1999 reign as the official Lara Croft look-a-like. Lara Croft will never be seen wearing this outfit again as the new-look costume was unveiled earlier this year by new Lara model, Jill de Jong.

Rose Nelson, UNICEF regional fundraising manager - London says: "The magnificent Ł4,400 that Eidos has raised for UNICEF by auctioning Lara Croft's outfit will go a very long way to helping some of the world's 130million+ children who are currently not receiving an education. The money generated through Lara's outfit will help UNICEF to continue working world-wide so that EVERY child can reach their full potential."

Jeremy Heath-Smith, managing director of Core Design, developers of Tomb Raider says: "We are thrilled with the amount of money the auction has made for UNICEF. We know Lara has some very dedicated fans from all over the world, but this is a real tribute to the first lady of gaming."
Companies: Core Eidos
People: Jeremy Heath-Smith
Games: Tomb Raider