Third instalment promises to be the 'state of the art' rally experience. 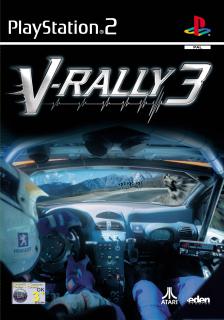 The weather forecast predicts a mud-spattered summer for PlayStation 2 computer entertainment system and Game Boy Advance owners as Infogrames returns the hugely successful V-Rally brand to the digital mud tracks with V-Rally 3. Falling under the newly reinvented Atari brand and with more than four million units in the series sold to date, V-Rally 3 is a triumphant comeback for one of the most realistic rally games ever made and promises to be the definitive rally racer on PlayStation 2 and Game Boy Advance.

?V-Rally 3 brings all the tire-spinning realism of rally racing into players? living rooms with an incredible range of tracks, fully detailed cars and a powerful game engine allowing for stunning graphics,? said Jean-Philippe Agati, senior vice president and head of Infogrames, Inc.?s Los Angeles studio. ?With up to 16,000 polygons per car and more than half a million polygons per track, V-Rally 3 for PlayStation 2 is pushing technology to the limit to blow the doors off the competition.? Additionally, the Game Boy Advance version will give players-on-the-go a 3D rally racing experience with fluid animations and gameplay similar to games previously seen on the original PlayStation.

The PlayStation 2 game boasts a wide variety of racing experiences with enhanced interactivity that features realistic car physics and authentic WRC and S1600 car noises that validate V-Rally 3?s claim to the PlayStation 2 rally racing crown. Destructible track elements, high-resolution cockpits and all the progressive damage that gamers would expect from driving high-speed through hostile landscapes, make V-Rally 3 the genre-defining experience that mud-slinging racers have been hungering for since the last incarnation of the franchise.

The original V-Rally game, developed by Infogrames? Eden Studios, the French software team known for their mastery of racing games, debuted on PlayStation in 1997. The game soon became one of the system?s benchmark racers and set the standard for racing graphics and great playability, which exploded onto virtually every major platform. While Eden Studios is bringing their development expertise to V-Rally 3 for PlayStation 2, V-Rally 3 for Game Boy Advance is in development by Infogrames? internal studio in France. Both games will feature licensed cars and loads of tracks and will be distributed by Infogrames, Inc. to most major retail stores this summer.
Companies: Atari Infogrames
People: Jean-Philippe Agati
Games: V-Rally 3