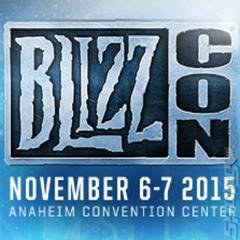 IRVINE, Calif.--(BUSINESS WIRE)-- The biggest Blizzard bash of the year is almost here! BlizzCon® 2015 is coming this November 6-7 to the Anaheim Convention Center?and anyone who's not attending in person can still join in on the excitement from home with the BlizzCon Virtual Ticket, available now at www.blizzcon.com.

BlizzCon is an epic celebration featuring Blizzard Entertainment's game universes and the global player communities that bring them to life. With the Virtual Ticket, Blizzard gamers around the world can get a front-row seat for the action across two high-def streaming channels of coverage, including developer panels, interviews, and community contests?this year hosted by author, actor, and all-around good geek, Wil Wheaton (@wilw).

"BlizzCon is the ultimate Blizzard community event, and we're thrilled to give even more people around the world a chance to be a part of it with the Virtual Ticket," said Mike Morhaime, CEO and cofounder of Blizzard Entertainment. "Whether they're hearing cool news about their favorite game, cheering on the community contests, or getting behind-the-scenes insight from the developer panels, we want everyone at home to feel like they're right there with us."

The BlizzCon 2015 Virtual Ticket is available to order now for $39.99 USD, and grants access to two days of live convention coverage and other content, including:

Developer Panels - Get the scoop on the latest developments for your favorite Blizzard games, including World of Warcraft®, StarCraft® II, Diablo® III, Hearthstone®, Heroes of the Storm?, and Overwatch??live from the main and panel stages.
Community Contests, Hosted by Wil Wheaton - Don't miss a minute of the legendary BlizzCon costume and talent contests on Friday night?emceed by writer, podcaster, TableTop creator, and champion of geek culture Wil Wheaton.
Exclusive Interviews - Go beyond the latest announcements and get even more insider info from members of Blizzard's development teams in a series of in-depth interviews.
Closing Ceremony - Every Virtual Ticket holder gets a great seat for the Saturday night closing celebration, which wraps up two days of Blizzard gaming and eSports action in style?stay tuned for more details.
On-Demand Replays - Miss a panel or just want to relive an awesome moment? The Virtual Ticket provides access to on-demand replays of main-stage and panel-stage events (available for two weeks after the show).
In-Game Goodies - As a bonus, the Virtual Ticket also comes with this year's commemorative BlizzCon in-game goodies for a variety of Blizzard games?more details soon!
Advance Access to BlizzCon Loot - Shop for BlizzCon merch from home with early access to this year's online BlizzCon sale, scheduled to run from October 16 through November 8, and snag some cool new Blizzard gear created for the show.?

New for 2015?Get Yourself a Goody Bag

For the first time ever, Virtual Ticket buyers also have the option to purchase a BlizzCon Goody Bag, containing a treasure trove of cool commemorative BlizzCon-exclusive loot?a new way to bring a piece of the BlizzCon experience home. Available to pre-purchase now through the Blizzard Gear Store for an additional $34.99 USD (plus tax, shipping, and applicable fees; limit 1 per Virtual Ticket), the Goody Bag is the same one given out to BlizzCon attendees, and is expected to ship out prior to the show in early November.? This loot's not likely to lie around for long?supplies are limited, so be sure to lock in your pre-purchase before they're all claimed. Visit BlizzCon.com for more information.

Watch All the eSports Action Free

Even if you don't purchase a Virtual Ticket, you'll still be able to catch plenty of BlizzCon action online free of charge. Coverage of the opening ceremony and the eSports tournaments taking place at BlizzCon?including the Global Finals for the 2015 StarCraft II World Championship Series, World of Warcraft Arena World Championship, Hearthstone World Championship, and Heroes of the Storm World Championship?will be streamed free in HD at www.blizzcon.com.

BlizzCon would not be possible without the enthusiasm of Blizzard Entertainment gamers around the world as well as the generous support of the event's partners?Intel, NVIDIA, DIRECTV, Gigabyte, Samsung, Rosewill, Amazon Appstore, Logitech, Corsair, and Razer.