Keep cool this summer... stay in and slaughter even more zombies 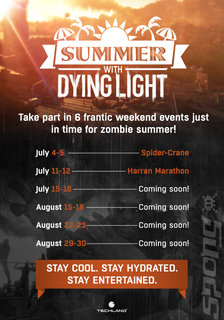 July 3rd, 2015 ? Warsaw, Poland/? Summer is traditionally a slow season in gaming ? but not for Dying Light players. This July and August, all zombie-slashing fans have much to look forward to thanks to Techland?s ?Summer with Dying Light? campaign. Through six specific weekends players will have a chance to take part in varied one-time only events that will make their playtime even more exciting. You can find the campaign schedule below:

The campaign starts with the Spider Crane weekend. With unlimited grappling hook shots and almost no fall damage, players will be able traverse the city of Harran like never before. The event starts on Saturday July 4th at midnight 0:00 PST and ends on Sunday, July 5th at midnight 0:00 PST. Details of future weekend events will be announced soon through Dying Light?s official website.

?Summer with Dying Light? is separate from Techland?s ongoing #DrinkforDLC campaign, in which players posts pictures of themselves drinking water to unlock future free DLCs for Dying Light which the team are currently designing.