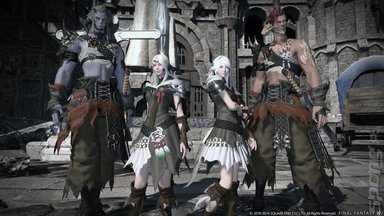 All Images (23) »
LONDON (27th April 2015) ? This weekend saw FINAL FANTASY® XIV producer / director, Naoki Yoshida, appear at the Nico Nico Chokaigi 2015 event in Tokyo ? which featured an ?on-the-road? version of the ?Letter from the Producer LIVE? where he discussed the upcoming FINAL FANTASY XIV expansion, Heavensward?.

During the producer letter, Yoshida revealed a brand-new trailer for the Heavensward benchmark software that showcase the three new playable jobs, exciting dungeons and new areas, and flying mounts. The Heavensward benchmark software is available now for players to test their PC ahead of release, and to create characters including the brand-new playable race, The Au Ra.

The Heavensward benchmark software is available now. To download, and for more information, visit: http://eu.finalfantasyxiv.com/benchmark/en/download/

FINAL FANTASY XIV: Heavensward releases on 23rd June 2015 and will feature a new story that drops adventurers into the heart of the Dragonsong War, the bloody, thousand-year conflict between the knights of Ishgard and the dragons of Dravania. Adventurers can also look forward to an increased level cap from 50 to 60 on all disciplines, a new playable race, new dungeons and raids, new primal battles, and the introduction of flying mounts that allow players to take to the skies on flying black chocobos®, single-rider airships, dragons and more!