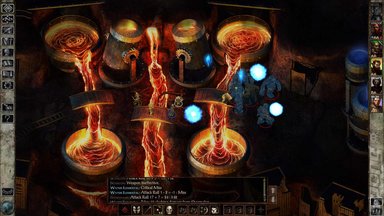 Baldur?s Gate II: Enhanced Edition
Can you resist the evil within you, forge a legend of heroic proportions, and ultimately destroy the dark essence that haunts your dreams? Or will you embrace your monstrous nature, carve a swath of destruction across the realms, and ascend to godhood as the new Lord of Murder?

Features & new levels:
? Throne of Bhaal
? Fist of the Fallen
? A Price Paid in Blood
? A Voice in the Dark
? Defense of the Wild
? The Black Pits 2

Icewind Dale: Enhanced Edition
Originally released in 2000, Icewind Dale is a Dungeons & Dragons game set in Wizards of The Coast's legendary Forgotten Realms. This Enhanced Edition allows players to experience the epic adventure on PC, Mac and Linux, and includes a host of new features:
Swords and Sorcery: Discover dozens of new spells and items, including new magic armor and weapons.
Blackguards and Wizard Slayers: Select from more than 30 new kits and classes to create the perfect adventuring party.

A New Look: Experience the Enhanced Edition's all new interface, including the new Quickloot bar.
Bring A Friend: Join your fellow adventurers in cooperative, cross-platform multiplayer games.
See The Unseen: Explore quest content cut from the original game, now finished and restored.
More to Experience: Enjoy the countless bug fixes and improvements that await you in Icewind Dale: Enhanced Edition!

Icewind Dale: Enhanced Edition includes both Heart of Winter and Trials of the Luremaster expansions.