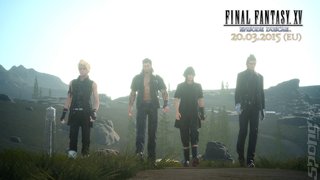 LONDON (16th February, 2015) ? With the release of FINAL FANTASY TYPE-0 TM HD fast approaching, Square Enix Ltd., today released a European version of the final Japanese trailer for the title - unveiled during its SQUARE ENIX ?Active Time Report? in Tokyo last week. Detailing the overall storyline and the struggles that Class Zero will face, the trailer gives fans a further look at FINAL FANTASY TYPE-0 HD and the World of Orience ahead of the game?s arrival across Europe and PAL territories on the 20th March 2015.

In addition, the company has also released further information detailing some of the content players can expect to see in FINAL FANTASY XV ?EPISODE DUSCAE- as well as conditions and instructions for obtaining the demo.

Built using Luminous Studio ? the highly impressive new engine and technology from SQUARE ENIX, FINAL FANTASY XV - EPISODE DUSCAE - delivers the next-generation of role-playing and adventure, featuring a vast open world to explore filled with plains, forests and exotic indigenous species. The demo?s subtitle ? EPISODE DUSCAE- refers to the region of the fictitious world that the content from the demo is set. While the demo will allow players to explore the Duscae region, the full game will have many more regions to explore within its massive world.

FINAL FANTASY XV ?EPISODE DUSCAE? will include several hours of playtime and features plenty of hidden secrets, giving players lots to see and do.

Those who have purchased the boxed version (first print, ?Day One? edition only) of FINAL FANTASY TYPE-0 HD will receive a demo download voucher included inside the game box. This will be redeemable via the PlayStation Store / Xbox LIVE Marketplace until 20th March 2016. Once downloaded onto your console?s hard disc drive, the demo will be yours to keep until you choose to delete it - and will not be erased from your hard disc drive at the request of Square Enix. An internet connection will be required to download the demo.

About Final Fantasy Type-0 HD
FINAL FANTASY TYPE-0 brings an immersive world, memorable characters and the production value known of the series, together with high quality gameplay and storytelling truly worthy of the FINAL FANTASY name.

This upcoming blockbuster title will transport you to the dynamic and enthralling world of Orience, where a turbulent war of nations threatens to tear the land apart.

Step into the fray as Class Zero, a group of students from an elite military academy whose country is attacked by an aggressive neighbouring Empire.
In the brutal and harrowing struggle that follows, you must engage a range of powerful magical and combat abilities using a new and exciting battle system, to defeat the Empire and uncover the secrets behind the war.

About FINAL FANTASY
Since the release of FINAL FANTASY in 1987, this unique RPG series continues to showcase the spectacular visuals, highly imaginative worlds and rich stories leading the industry and earning the highest accolades from users around the world. Titles of the series have so far achieved a cumulative shipment of over 110 million units worldwide.

More information on Square Enix Ltd. can be found at http://www.square-enix.com/eu/en/.